Home » Beer » Beer and There – Beyond Asheville: Flagstaff, Arizona 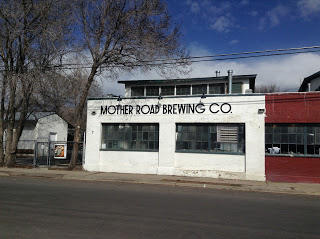 Beer and There – Beyond Asheville: Flagstaff, Arizona 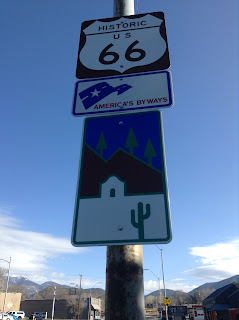 As you might imagine Matt and I checked out some breweries along the way. In Albuquerque, our friend took us to several and most of them were quite good. There was only one we really didn’t like. It was a great time.

Our next stop was Flagstaff, AZ. We knew nothing about the town before driving across the desert toward an impossible mountain and it turns out that it is an awesome little mountain/college town not entirely unlike Asheville.

We stayed at a quirky hotel right on Route 66. I would have liked it to be quirkier but it was just fine. We were also walking distance to all four of the breweries in the small town. We tried three out of the four. I’m not really sure why we never made it to the fourth because it was right next to the sushi place where we had dinner but I think we were tired and the time zone difference was finally catching up to us. 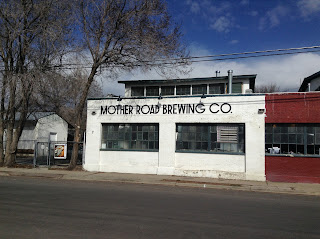 We had a favorite, though. Since it was right on the walk between our hotel and downtown we stopped there more than once in our two nights in Flagstaff. It is called Mother Road Brewing. Their tasting room has a sweet warehouse feel and the staff was awesome. We sat at the bar the first night and talked with the bartenders. They only had four beers on tap but the quality was outstanding. I love a place that concentrates on making a few beers extremely well than trying to make hundreds of styles that each taste average. My two favorites were their Gold Road Kolsch, which went down very easy, and the Lost Highway Imperial Black IPA. Gold Road was crisp and refreshing but had enough body that it didn’t taste like a corporate beer. Lost Highway was super hoppy but with chocolate malts that enhanced the experience.

I do want to give an honorable mention to the little town of Jerome, Arizona. We were at Bar of Soap here in town doing laundry before our trip and a couple people recommended that we check it out. It is pretty crazy. There is one tee-tiny road going up a very steep mountain and it is the only way up and back. Because it looked over the desert you could see Mount Elden by Flagstaff in the distance. The reason it was recommended was because Caduceus Wine Cellar is there – owned by Maynard from the band Tool. On the plane out west we watched the movie Blood Into Wine about the winery. Very good movie.

We enjoyed the winery as well and while we don’t often drink wine we enjoyed the tasting that we had. Caduceus uses all Italian grapes for their wines which we know we like and they are all very robust and flavorful. We might have brought some back with us.

Laura M. LaVoie is a freelance writer living in Asheville North Carolina. She lives in a 120 square foot house in the mountains north of Asheville with her partner, Matt, and their hairless Sphynx cat, Piglet. The tiny house is off the grid and the couple generate all of their power through solar panels and collect all of their water from a natural spring. When not living off the grid, Laura enjoys the beer culture of the Asheville area, voted Beer City USA 4 years in a row.
Previous UNCA Drag Ball 2013
Next Old Plaster Walls