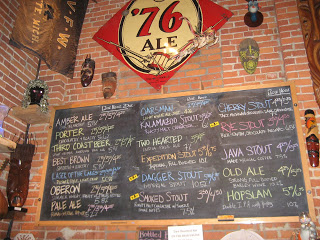 There are just a couple of day left to vote for Beer City USA. Check out the poll here if you haven’t voted yet.

I cast my vote on Monday. I voted for Asheville, of course. There are 22 cities on the list and I am extremely proud to live in one of them.

I am extremely happy to live in a city where there is such an amazing beer culture. I love that I can walk between several top notch breweries within the downtown area. I am excited that more will be opening their doors.

I decided on Monday that I was only going to drink Asheville beer until the voting was closed. Not that it would do anything to influence the vote. I just love Asheville beer. I just decided that for one week I want to support the local brewers only. It is for me more than them.

Asheville has been Beer City USA for four years in a row, tying last year with Grand Rapids, Michigan. I think we have some great competition this year. I was surprised to see three Michigan cities on the list (Along with Grand Rapids are Kalamazoo and Ann Arbor). My fear is that this will split the Michigan vote. Out of the three, I personally prefer Kalamazoo – home of Bell’s Brewery – because I went to college there and I love the beer.

Ultimately, it doesn’t matter who wins the most unscientific internet poll. What I do know is that Asheville has a fantastic beer culture and we like to share it with the rest of the country. Want to see what it is all about? Then come on down to Asheville.

Asheville beer week starts on May 25th, eventually culminating with Beer City Fest on June 1st. We will be at various events around town so we hope to see you there.

Laura M. LaVoie is a freelance writer living in Asheville North Carolina. She lives in a 120 square foot house in the mountains north of Asheville with her partner, Matt, and their hairless Sphynx cat, Piglet. The tiny house is off the grid and the couple generate all of their power through solar panels and collect all of their water from a natural spring. When not living off the grid, Laura enjoys the beer culture of the Asheville area, voted Beer City USA 4 years in a row.
Previous Mommy Time
Next The Best Beer You Can’t Get in Asheville