This past weekend, Matt and I had a Beerthday party.  Since our Birthdays are only a couple of days apart, it is easy to combine the celebration. We sent out the invites to a few friends to attend our Beerthday party at local brewery 5 Seasons. We... 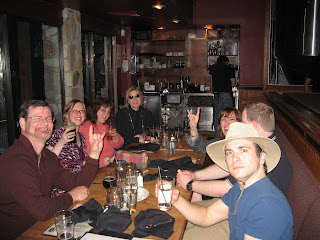 This past weekend, Matt and I had a Beerthday party.  Since our Birthdays are only a couple of days apart, it is easy to combine the celebration. We sent out the invites to a few friends to attend our Beerthday party at local brewery 5 Seasons. We had a great time and even got some beer related gifts (which weren’t required, but our friends are awesome that way).  I enjoyed three of their beers. First, I had the Brave Sir Robin Brown, a slightly hopped roasty brown beer.  The I had their Red, which I don’t see on their website but I found it very crisp and tasty.  Lastly, I tried their Stout, which also is missing from the website. I think everyone had a great time, which you can see in the photo because both Emily and Bill think it “rocks!”  Afterward we came back to our apartment and hung out, drank more beer and listened to Matt play guitar. 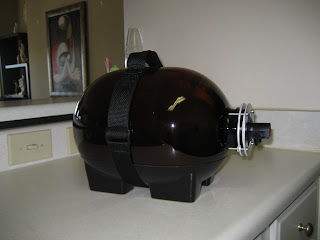 On Sunday, we bottled our second batch of beer ever.  This one was the ESB we brewed a month ago.  The process went smoothly.  We even used my birthday present from Matt this year, the Party Pig.  He bought it on the recommendation from some friends who also home brew and the first use so far seems pretty cool.  It is kegging without all the hassle of kegging.  We also used the bottles that And and Emily gave us at our Beerthday Party.  The beer is conditioning in the closet as we speak and we should be able to enjoy it in about three weeks. 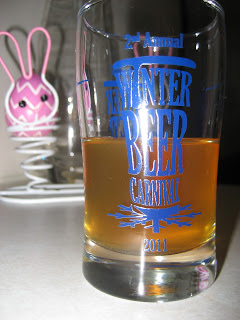 The taste test of the beer was seemingly successful.  I liked the golden color of the ESB, the hops seems to be well balanced.  Even without being carbonated, I thought it was pretty good.

I have also been pleased with the clarity of our beers so far without going through a secondary fermentation process (also known as a clarification). It might just be beginners luck or the fact that we like to use a filter when pouring the beer in the carboy and again when we put it in the bottling bucket.

I have another brown recipe ready to go.  This time, I bought a “kit” from Austin Homebrew but added some additional malts to modify it a little.  I expect to be brewing that in a few weeks and we’ll see how it goes.  Expect more updates from Beer and Now soon.

Laura M. LaVoie is a freelance writer living in Asheville North Carolina. She lives in a 120 square foot house in the mountains north of Asheville with her partner, Matt, and their hairless Sphynx cat, Piglet. The tiny house is off the grid and the couple generate all of their power through solar panels and collect all of their water from a natural spring. When not living off the grid, Laura enjoys the beer culture of the Asheville area, voted Beer City USA 4 years in a row.
Next Girls a-Brewin’!