Music is part of the family for the performers at the Blue Ridge Music Trails "Traditions” Concert, set for Saturday, November 29, at 7:30 pm at the White Horse Black Mountain Music Hall in Black Mountain. This concert, “Family Traditions,” showcases the talents of two duos for whom the traditional music of the NC mountains and foothills has long been an integral part of their lives. One might say music is in their blood.

Music is part of the family for the performers at the Blue Ridge Music Trails “Traditions” Concert, set for Saturday, November 29, at 7:30 pm at the White Horse Black Mountain Music Hall in Black Mountain. This concert, “Family Traditions,” showcases the talents of two duos for whom the traditional music of the NC mountains and foothills has long been an integral part of their lives. One might say music is in their blood.

Bryan McDowell and Emma McDowell Best
Bryan and Emma grew up around traditional bluegrass music and were influenced by some of the genre’s best artists at a very early age. Their interest in music was encouraged as they grew up in the music-rich culture of Western North Carolina, receiving instruction from such acclaimed performers as Madison County fiddler Arvil Freeman and others.

They performed with their family band, The McDowell Family, for eight years and later as a duet. Their compositions have been selected for the IBMA Songwriter’s Showcase, and Bryan has won 22 championships on fiddle, guitar, and mandolin – including a triple-win at the Walnut Valley/Winfield Kansas Championship.

Bryan moved to Nashville and joined the Claire Lynch band in 2011. He has toured extensively and recorded two projects with them, and has also shared the stage with Tony Rice, Bryan Sutton, Sierra Hull, and many other bluegrass music greats. Emma married Jared Best, grandson of the late Carroll Best, and focuses on teaching music lessons, songwriting, and performing at local venues in the WNC area.

Jason and Jacob Burleson
Jason Burleson started playing banjo at age 11. Initially inspired by his love of Flatt and Scruggs’ music, he quickly moved on to the next generation of bluegrass musicians including Tony Rice, David Grisman, and Newgrass Revival, adding guitar and mandolin to the list of instruments he played. Jason joined the band Blue Highway in late 1994. The band has toured the world and won numerous IBMA awards, garnered three Grammy nominations, and won a Dove Award. He continues to tour with the same members that started the band 20 years ago.

His son Jacob has been playing since “he could drag one through the house.” Initially starting on a toy keyboard, he became inspired to play bluegrass music after a trip to IBMA. He performed on the IBMA Awards Show in 2013 as part of the Youth All Stars, playing mandolin and is featured on the Generation Bluegrass DVD series spotlighting young bluegrass musicians. At the ripe old age of 15 years old he is equally adept on guitar, banjo, dobro and mandolin.

Laura Boosinger
Laura Boosinger, an acclaimed banjo musician, will host this show. Laura’s musical “family” includes many of the region’s finest traditional musicians and the students in her Junior Appalachian Musicians program at the Madison County Arts Center, where she serves as Executive Director.

The concert is presented by the Blue Ridge National Heritage Area Partnership (BRNHA) as part of the Blue Ridge Music Trails Program. “Our Traditions concerts have become favorites of music lovers in our region because they not only share our traditional music, but also the history of how it came about,” said Angie Chandler, Executive Director of the BRNHA.

This article was submitted by an awesome reader. We gladly publish user submissions. For more about the author of this particular article, we have inserted the author bio at the bottom of the content when it is provided. Submit your own article by following this link: http://ashevilleblog.com/submit-an-article/
Previous Asheville’s Greatest Free Paper for Kids Seeks a New Way
Next Acoustic Syndicate’s Annual Thanksgiving Show Set For Sat 11/29 at The Grey Eagle 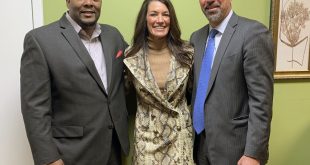