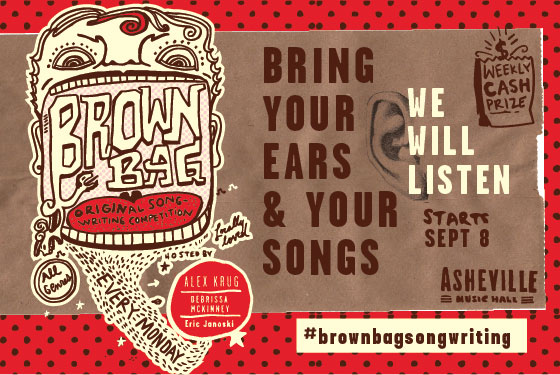 Asheville’s “Original Songwriting Competition” To Be Hosted On Mondays Throughout The Fall At The Asheville Music Hall Starting On September 8th, 2014

The Brown Bag Songwriting Competition is proud to announce the dates for it’s upcoming season of open-mic nights. Now in its 8th year, the Brown Bag will move to the Asheville Music Hall’s main room and kick-off the weekly songwriting and performance competition on Monday, September 8th, 2014 and continue each Monday following until November 17th, 2014. A Brown Bag Finals Showcase will take place on Sunday, November 23, 2014.

Each Monday, local and regional musicians of varying experience levels compete for the weekly prize – a literal brown bag stuffed with money donated throughout the evening by fans and attendees. Brown Bag attracts first time as well as seasoned performers to compete and be heard by peers, music fans, and music industry professionals. Each week, a panel of celebrity judges selects a showcase winner to receive their brown bag prize and to compete in the Brown Bag Finals.

Brown Bag is the only competition of its kind in Western North Carolina. In a region full of creativity and musicality, Brown Bag serves as the ground floor for Asheville’s emerging talent. “We are proud to provide a supportive listening environment for original music and elevate the craft of songwriting,” says Jenny Greer-Fares, founder of Brown Bag. “It’s all about original music and the search for variety and individuality.”

Performers can sign up each week to compete in the Brown Bag Songwriting Competition in advance through the Brown Bag’s Facebook page (www.facebook.com/brownbagsongs) or at the venue starting at 7:30 pm. Ten performers will be cleared (five from Facebook, and five from venue registration) at each event to showcase two original songs. More details about sign-up can be found on the Brown Bag’s website and social media pages.

This article was submitted by an awesome reader. We gladly publish user submissions. For more about the author of this particular article, we have inserted the author bio at the bottom of the content when it is provided. Submit your own article by following this link: http://ashevilleblog.com/submit-an-article/
Previous Comedy Legend Bobcat Goldthwait Appears at The Millroom Fri. 9/12 – Sat. 9/13
Next Asheville Humane Society Announces Adoption Challenge