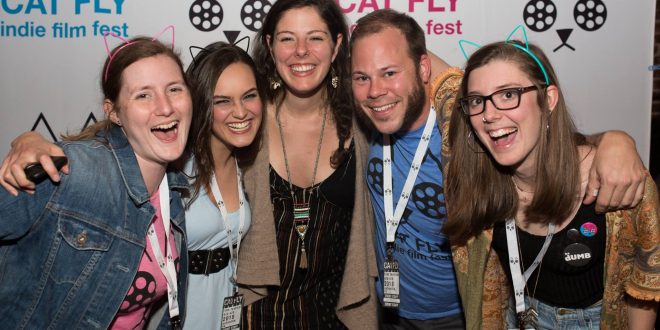 Cat Fly Indie Film Fest is taking over Asheville, returning for its 3rd annual spring festival March 29-31. The three day event will include over 25 short films, 1 feature film spotlight as well as educational components and mixed media collaborations by local and regional filmmakers and performers of the southeast.

Opening Night kicks off with a red carpet reception at the Asheville Masonic Temple and a screening of traditional narrative and documentary short films. The event is black tie optional and the reception includes craft beer provided by Wicked Weed Brewing, as well as wine, champagne and gourmet bites all included with your ticket. Immediately following is a 2nd block of programming called Cat Fly After Dark: a Collaboration of Film and Music at the Mothlight which will showcase live performances and serve as the premiere of “Disco Paw,” a 5 part music video series.

“Cat Fly does a great job of bringing together several different creative mediums (music, visual arts, etc.) to create an all-encompassing experience…. which push the boundaries on what a traditional film festival might include.” says graphic designer Emma Ensley.

Saturday’s programming incorporates an acting workshop at the Asheville School of Film by Gunner Willis (of Netflix’s OZARK and HBO’s VICE PRINCIPALS) and a table read at the Asheville Studio during the day. Community Night’s evening screening will take place at New Belgium Brewing showing horror, experimental and genre-bending content. The festival concludes Sunday at the Fine Arts Theater with the Feature Spotlight screening of “Pop-Pop is Dead” which was shot on location in Gaffney, SC.

“This film festival is amazing! So much fun and super supportive of creative independent film. The communication is superb, the venues are exciting, and the films are thought-provoking and entertaining.” says local filmmaker Jennifer Trudrung.

“Cat Fly is so much more than when we first started,” says Programming Director Brittany Jackson. “Over the last three years, it’s been incredible to see the professional connections made at Cat Fly events bloom into collaborative projects and a greater sense of community.”

Screenings, workshops and performances will take place throughout the weekend. Single-day tickets or VIP weekend passes can be purchased on the Cat Fly Website. Limited number of press passes available upon request.

Since 2017 we have cultivated a spirited & gender-inclusive collective of dedicated, homegrown filmmakers who span across the Southeast.

Cat Fly was created by filmmakers, for filmmakers to help connect and build a dynamic community of talented & passionate future collaborators.

This article was submitted by an awesome reader. We gladly publish user submissions. For more about the author of this particular article, we have inserted the author bio at the bottom of the content when it is provided. Submit your own article by following this link: http://ashevilleblog.com/submit-an-article/
Previous HIGHLAND BREWING COMPANY ANNOUNCES TART SPRITZ ALE
Next ASHEVILLE KIWANIS GIFTS $85,000 TO ABCCM TO HELP HOMELESS ­WOMEN AND CHILDREN﻿