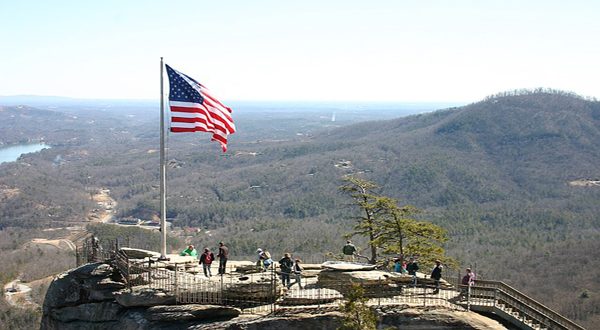 Celebrating 100 Years of State and National Parks in WNC

Western North Carolina’s natural beauty has drawn visitors and residents to our area for centuries, so it’s no surprise that some of the very first state and national parks were established right here. Today, our region is surrounded by protected parklands, which are visited by millions of people each year and provide a stunning backdrop for our cities and towns.

2016 marks the 100th birthday of the US National Park Service, as well as the centennial for Chimney Rock State Park and Pisgah National Forest. Celebrate these milestones by learning, relaxing, and reconnecting with nature in these unique protected areas.

In 1916, North Carolina gained 795 acres of land, creating the first state park in all of the Southeast: Mount Mitchell. Since then, the state system has grown to almost 250,000 acres dedicated to conservation, recreation, and education.

“The idea of protecting and preserving North Carolina’s natural and cultural resources really started with Mount Mitchell State Park,” says Skyler Hill, park ranger at Mount Mitchell. “Those seeds of conservation were planted really early in the 1900s. With the starting of the state park system, not only throughout the state of North Carolina do you find what would be considered world-class scenery and great recreational opportunities, but you find land and waters that are really unique to this country and are very valuable to North Carolina citizens.”

One of the first national forests in the US, Pisgah National Forest also celebrates its centennial this year. Comprising more than 500,000 acres of hardwood forests and cascading waterfalls across 12 counties, Pisgah makes up a significant portion of the remaining forested land in Western North Carolina. Pisgah is home of the first tract of land bought under the Weeks Act of 1911, a purchase which led to the creation of national forests along the eastern United States. The protected area is also home to the nation’s first school of forestry, now accessible as the Cradle of Forestry Historic Site.

“Having lived here all my life, I have an affinity and a love for the mountains themselves,” says Gavin Brown, mayor of Waynesville. “My favorite thing to do is to simply get on the expressway and keep going west until the sun sets. And if I get to the Blue Ridge Parkway or if I get to the Smoky Mountains National Park, I just keep going because there’s nothing to stop me.”

Attracting more than 9 million tourists and 11 million non-recreational visitors each year, Great Smoky Mountains National Park is the most visited in the United States and it’s easy to see why. The park is a perfect retreat for for hiking, camping, fly fishing, and other outdoor activities. Even as one of only a few national parks that does not charge an entrance fee, GSNP serves as an economic hub generating over $700 million per year and supporting more than 10,000 jobs in surrounding communities.

Lucky visitors of GSMNP can also view the park’s signature wild elk, reintroduced to the Cataloochee Valley in 2001 after nearly becoming extinct, and now thriving in this striking success of natural conservation.

“A visit to Chimney Rock Park gives people the opportunity to see the best of the mountains in one place,” says Mary Jaeger-Gale, general manager of Chimney Rock at Chimney Rock State Park. “We have fabulous cliffs, we have a waterfall, we have outstanding views, the geological and botanical features are incredibly significant, and people can come away not only having had a fabulous mountain experience but learn a lot about why these mountains are so special.”

Western North Carolina’s state and national parks provide an abundance of natural resources, as well as employment opportunities for those entrusted with their care and conservation. It is important we continue to support and protect our state and national park systems for future generations. “I personally believe that the whole economic future of Western North Carolina is based on its geography,” says Mayor Brown. “If we maintain the integrity of that geography, then we’ll have an economy that we can survive in.”

To find out how to volunteer or how to join in our parks’ centennial celebrations, visit their websites: ncparks.gov/mount-mitchell-state-park, nps.gov/grsm, and chimneyrockpark.com. To learn more about all the incredible natural resources in Western North Carolina, contact your Beverly-Hanks & Associates real estate associate today.

For more than 40 years, Beverly-Hanks & Associates has been committed to being Western North Carolina's best real estate company. Our strength lies in our ability to provide you with the services of highly trained, caring professionals who are experts in this unique region. Many of our agents are lifelong residents and each member of our organization shares a commitment to service aimed at building long-lasting relationships with our customers, clients, and the community at large. Today, Beverly-Hanks & Associates, REALTORS® is honored to represent more homes and land for sale throughout Western North Carolina than any other real estate firm. Learn more at beverly-hanks.com.
Previous Wicked Weed Brewing and Creature Comforts Announce Juiceless IPA
Next New Belgium Starts Brewery Tours in Asheville This Week