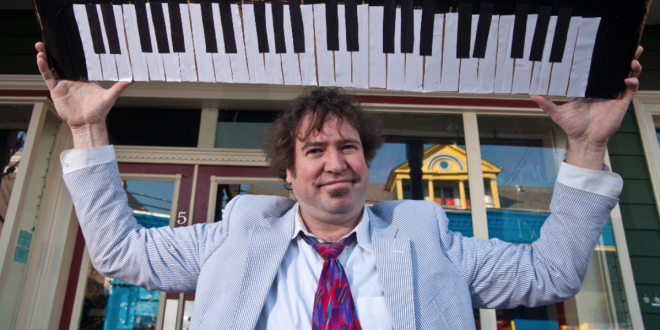 “Davis minces no words and pulls no punches, like the Crescent City itself, he is a force to be contended with.” ~ Ani DiFranco

Salvage Station is proud to announce that Davis Rogan of HBO’s TREME will be performing a free show on Wednesday, November 11th at 8pm. Davis is a fifth-generation New Orleanian who served as an actor, scriptwriter, piano coach, and songwriter as well as the muse for the popular character, Davis McAlary, over the show’s four-year run.

Davis draws his musical inspiration from Professor Longhair and Fats Domino, as does every New Orleans rhythm and blues piano player. What separates Davis is his lyrics. The wit, irony and self-deprecation echo Randy Newman, but the wry observations about life, humanity and New Orleans are uniquely his.

This combination of roots music and sharp lyrics, heard in the 2005 release, The Once and Future DJ, drew auteur David Simon to Davis as David prepared his HBO series about New Orleans, TREME. Davis began working as a consultant and, over six years and four seasons of the show, served as an actor, a scriptwriter, a piano coach, a songwriter and the muse for the character Davis McAlary. By the series’ end, Davis had written or placed more music in the show than any other musician.

This article was submitted by an awesome reader. We gladly publish user submissions. For more about the author of this particular article, we have inserted the author bio at the bottom of the content when it is provided. Submit your own article by following this link: http://ashevilleblog.com/submit-an-article/
Previous Announcing the LEAF Love Fund Campaign
Next Bow Wow Film Festival to benefit Brother Wolf Animal Rescue