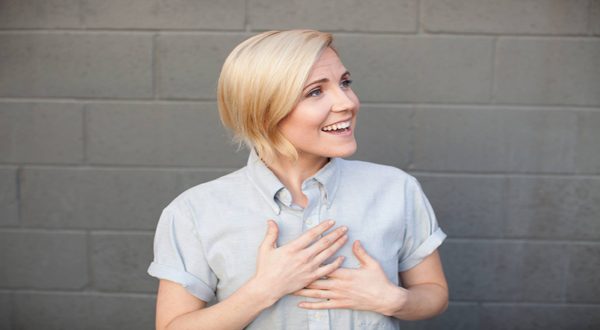 Hannah Hart became famous for drunk cooking – literally. The 29 year old internet personality runs a channel on YouTube called My Drunk Cooking, where laughs are had as Hart cooks food while intoxicated. Since the inception of the weekly show in 2011, Hart has hosted many celebrity guests, including chef Jamie Oliver, author John Green, former pop star Lance Bass, and comedian Sarah Silverman.

In June, Hart was a guest judge for season 12 of Food Network Star. Her relationship with Food Network has not ended, as she announced on Twitter that filming for her own Food Network show has started.

Heading to fly to 1st location to film 1st episode of my TV show w/ @FoodNetwork!! I’m so excited!!!
See Below: pic.twitter.com/xfddsmh7IM

While the title of the show has not been revealed, it has been discovered that Hart is filming the first episode right here in Asheville. She was spotted at HomeGrown earlier today, and her Snapchat shows photos of food with HomeGrown’s window sign clearly in the snap.

I couldn’t help myself! So delicious. Asheville you lucky bastards. https://t.co/WJgYmGltotpic.twitter.com/F3gccmbr8N

We don’t know where Hart’s adventures will take her next, but we hope she checks out some of our personal favorites, including Hole Doughnuts and Blue Dream Curry.

Have you seen Hannah Hart around town? Tell us in the comments!

This article was brought to you by one of our awesome staff writers. Some of our writers don't want the fame and glory that comes along with being awesome, so we respect their privacy. Want to tell them how good their work is? Write a comment below and leave them some love!
Previous Addissae Awarded NC GreenTravel Initiatives Credential
Next Marian McLaughlin Plays First Show in Asheville 8/23