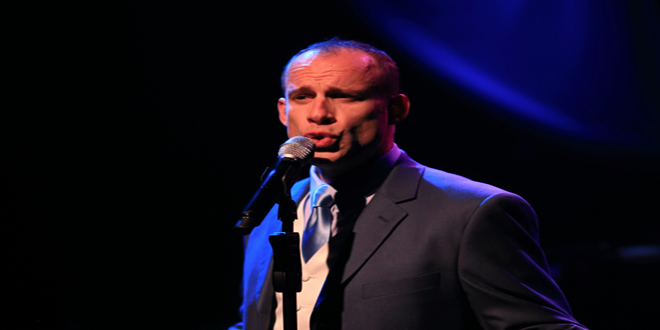 Flat Rock Playhouse Kicks Off 2016 Music On The Rock Series

Flat Rock Playhouse will launch its 2016 Music on the Rock concert series with “The Music of Barry Manilow” on February 11th at the Playhouse Downtown.  This highly requested tribute will feature such hits as Mandy, Copacabana, I Write the Songs, Looks Like We Made It and Can’t Smile Without You.

Flat Rock Playhouse regular Guy LeMonnier (Celtic Christmas, Music of the Night) returns to star in this musical celebration of one of the world’s best-selling artists of all time, backed by the Flat Rock Chorus under the direction of Diane David.

LeMonnier is a New York based actor and singer hailing from Grand Rapids, Michigan. He is most widely known as an original member of the Trans-Siberian Orchestra with whom he has toured the globe garnering an impressive following of fans. Most recently, he has appeared in roles on the hit TV shows: Gotham, Quantico, Broad City and Power. Additionally, he tours during the holiday season as a showcased artist for the Wizards of Winter and The Kings of Christmas. Theater credits include the Off-Broadway production of Around the World in 80 Days, Ragtime for Sacramento Music Circus, and the title role in the national tour of Jekyll & Hyde.

Alex Shields is the Music Director for The Music of Barry Manilow and will also play the keyboard with Paul Babelay on drums, Charles Holland on bass, David Gaines on synthesizer and Music on the Rock favorite Ryan Guerra on guitar.

Music on the Rock: The Music of Barry Manilow will run from February 11 – 14 at the Flat Rock Playhouse Downtown.  Evening performances Thursday at 7:30 PM, and Friday and Saturday at 8 PM.  Matinee perfomances  Saturday and Sunday at 2 PM.  Tickets are $25 and can be purchased by calling the Playhouse Box Office at 828-693-0731, toll-free at 866-732-8008 or online at www.flatrockplayhouse.org.