Matt has been out of town.  Actually, out of the country.  He is in Toronto with his brother this weekend.  But I wanted to brew the next batch of beer, so I set out to do just that.  I invited our friends Andy and Emily over for so...

Matt has been out of town.  Actually, out of the country.  He is in Toronto with his brother this weekend.  But I wanted to brew the next batch of beer, so I set out to do just that.  I invited our friends Andy and Emily over for some assistance and company.  The process went smoothly and the beer is fermenting away as we speak so I would consider it a success so far. 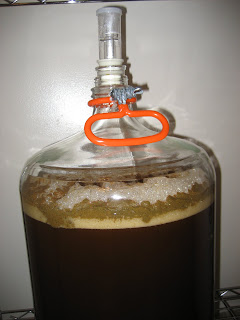 Since Emily was helping me out with the brewing this week I got to pondering the role of women in home brewing.  I’m familiar with the history of brewing and that it had long been a woman’s role in the household, but then the 20th century came and it became the domain of the college-age man.  There is a female presence in the professional brewing industry, but still don’t hear a lot about women home brewers.  When googling the subject, you find some articles as old as 1994 and messages in forums wondering if there are any women out there, but receiving only a few responses.  It seems that beer hadn’t been an interest for women until the craft beer boom in recent years, so it seems to me that brewing would be a hobby more women would want to get involved in. 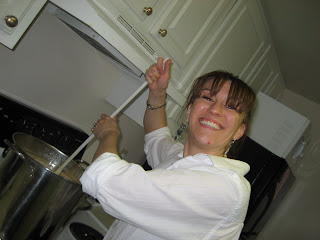 So, this weekend, with Emily helping me with my third batch of beer ever (and second brown) I wanted to celebrate Girl Power in brewing.  I really enjoy this process and I am getting more comfortable with my skills. I’m ready to move on to designing my own recipes. Maybe I can lead the way to a girls home brewing movement.  Who’s with me?

Laura M. LaVoie is a freelance writer living in Asheville North Carolina. She lives in a 120 square foot house in the mountains north of Asheville with her partner, Matt, and their hairless Sphynx cat, Piglet. The tiny house is off the grid and the couple generate all of their power through solar panels and collect all of their water from a natural spring. When not living off the grid, Laura enjoys the beer culture of the Asheville area, voted Beer City USA 4 years in a row.
Previous Beerthday Weekend
Next Not my usual, but nice