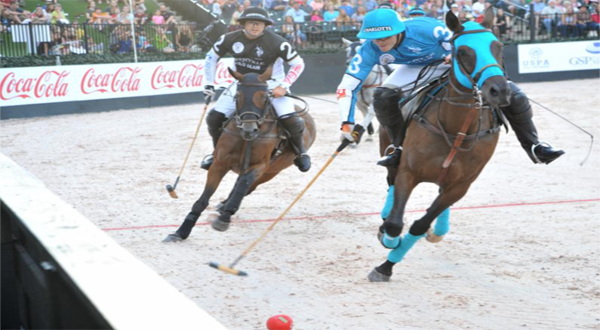 Gladiator Polo™ has taken the equestrian world by storm, bringing together troves of fans from around the country to experience this new high-growth horse sport. With a successful inaugural season in Wellington, FL, during the winter of 2017 and an immensely popular showcase game at Tryon International Equestrian Center (TIEC) in late June, worldwide interest and awareness of the game has increased significantly setting the table for a number of national and international initiatives that will be announced in the next month.

The Gladiator Polo™ $120,000 “Battle for the Carolinas” Fall Series, featuring four teams battling to claim the championship title and $120,000 in prize money throughout the series, will begin on Friday, September 1 and continue through the end of the month. Two teams from each of the Carolinas will battle for their respective states and finish the series with a North Carolina versus South Carolina clash not to be missed on Saturday, September 30.

Mark Bellissimo is preparing to announce the launch of new Gladiator Polo™ initiatives at the end of the month in conjunction with the “Battle for the Carolinas” Fall Series at TIEC.

“I’m thrilled to bring new energy to the world’s oldest team sport and revitalize polo on a global scale,” said Bellissimo. “The players and the league are already seeing increased enthusiasm for polo because of this modern approach. We look forward to dramatically expanding interest for players, fans, and sponsors.”

The series kicks off with the “Battle for South Carolina” with Team Greenville against Team Spartanburg on Friday, September 1. Carlucho Arellano, Mariano Obregon, and Pelon Escapite will wear black for Team Greenville, while Juan Martin Obregon, Jeff Hall, and Alan Martinez will wear red for Spartanburg.

The “Battle for North Carolina” will feature Team Charlotte against Team Asheville and take place on Saturday, September 9, as an installment of TIEC’s signature “Saturday Night Lights” (SNL) events. Team Charlotte, in teal, will see the return of Santi Torres, Jared Zenni, and Facundo Obregon, while Team Asheville will be represented by Geronimo Obregon, Jason Crowder, and Costi Caset in purple. The “Battle for the Carolinas” series championship will see the clash of the two winning teams on Saturday, September 30.

In September, Bellissimo will provide details for an enhanced Professional Gladiator Polo™ League, which will launch in Wellington, FL, during the winter of 2018. The Professional Gladiator Polo™ League will include a highly publicized player draft and feature team owners, similar to the most popular major league sports in North America. Eight teams will test their skills throughout the season in hopes of collecting a percentage of the minimum $500,000 of prize money offered through the duration of the series.

Gladiator Polo™ Manager Gates Gridley is looking forward to an action-packed fall series at Tryon Resort and the transition of Gladiator Polo™ back to Wellington, FL, later this year.

“Due to the overwhelmingly positive response from fans and players at Tryon’s debut Gladiator Polo™ match in June, it was clear that we needed to expand the sport and give fans more of this modern spin on traditional polo,” said Gridley. “We are excited to bring back the two teams and expand into a full fall series this September, as well as looking forward to the future of Gladiator Polo™ in Wellington.”

Did you miss out on the Asado buffet the last time Gladiator Polo™ was in town? Don’t worry, because it’s coming back on September 1st! Kick-off the evening with an authentic fire-grilled Argentine Asado buffet on the Legends Club Porch overlooking the ring starting at 6:00pm. The all-you-can-eat buffet features tri-tip of beef with chimichurri, garlic parmesan corn, roasted potatoes, Russian potato salad, smoked trout, chicken with rice, and more! A cash bar will be available. For pricing and to purchase your Argentine Asado buffet tickets click here!

The Gladiator Polo™ Fall Series is held in conjunction with the six-week Tryon Fall Show Series presented by Greenville-Spartanburg International Airport, which will begin on Friday, September 22, and continue through Sunday, October 29.

Tryon International Equestrian Center (TIEC) has quickly become an international hub for many of the world’s top equestrian athletes. We welcomes guests 365 days a year to watch, dine, shop, and experience one of the premier riding facilities in the world built for the love of horses and our sport.
Previous Michael Franti & Spearhead at Salvage Station
Next TIEC To Host 2017 Dressage Instructors Seminar Sept 12-15