Home » City Information » Grove Park is a Neighborhood with a Past, Present, and Future 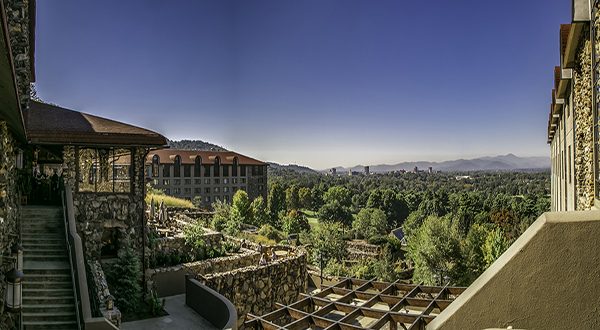 Grove Park is a Neighborhood with a Past, Present, and Future

The inviting Grove Park historic district, just northeast of downtown, is considered to be one of the finest neighborhoods in Asheville. Built primary a century ago, the community has its heart in the past, its spirit in the present, and its focus on the future.

A Short History of Grove Park

“This is pretty much the neighborhood as it was about a hundred years ago,” says Suzanne Escovitz, a Grove Park neighborhood resident. “The layout, the streets, a lot of the housing stock—it’s a good example of one of the first car suburbs in the United States.”

Like so many other historic Asheville residents, including another well-known “tourist”, Biltmore Estate owner George W. Vanderbilt, Grove was at once impressed with the scenery and the climate. The Vanderbilt’s estate, built in the late 1800’s on what was then the south end of town, led the way for Grove and others with similar visions to develop more areas. Along with other well-knowns like architect Richard Sharp Smith, Grove’s architectural planning shaped much of the look of north Asheville.

The Grove Park neighborhood achieved national status after being placed on the National Register of Historic Places in 1989.

In the Shadow of the Omni Grove Park Inn

Grove Park is tucked off of Charlotte Street in north Asheville. Much of the community sits just below the Omni Grove Park Inn Resort & Spa, from which guests and visitors can look out to the city skyline.

Erected in 1913 by Grove’s son-in-law, Fred Seely, the Grove Park Inn on Sunset Mountain was another of Grove’s visions and instantly became the cornerstone of the neighborhood’s identity. The stunning building has played host to a number of American presidents, diplomats, and celebrities over the last century. Today, it has retained its status and is the epicenter for an annual national gingerbread house competition featured in press all across the United States.

“For me it’s a great place to go up and grab a bite, grab a glass of wine on the terrace,” says Suzanne about the Grove Park Inn. “I think it’s wonderful to have a place of prominence on the National Register in the heart of the neighborhood with the homes surrounding it.”

Historic Homes with a Vision of the Future

The Grove Park Historic District is significant to Western North Carolina for its collection of single-family homes that represent the design and construction practices of early twentieth century architecture.

“What makes it, I think, so unique among historic neighborhoods is [that] this is what it looked like pretty much 80 years ago. And in another 80 years—this is the important part—it’s still going to look like this,” says Suzanne.

Most of the development of the neighborhood occurred between 1908 and 1938, illustrating a number of styles including: Georgian, Colonial, Tudor, Bungalow, and Shingle. Many of the homes are sited on wooded parcels averaging half an acre, with occasional size variance where some owners having smartly assembled plots over time. Time-honored deed restrictions concerning setback and building costs have allowed the properties to relate well to each other and maintain a high degree of integrity.

According to Suzanne, “This is a neighborhood that we like to feel has a past, present, and a future to it.”

Grove Park is a vibrant historic neighborhood. Read more about the Grove Park neighborhood, see more photos, or search for homes in the area from the Beverly-Hanks Grove Park community page

For more than 40 years, Beverly-Hanks & Associates has been committed to being Western North Carolina's best real estate company. Our strength lies in our ability to provide you with the services of highly trained, caring professionals who are experts in this unique region. Many of our agents are lifelong residents and each member of our organization shares a commitment to service aimed at building long-lasting relationships with our customers, clients, and the community at large. Today, Beverly-Hanks & Associates, REALTORS® is honored to represent more homes and land for sale throughout Western North Carolina than any other real estate firm. Learn more at beverly-hanks.com.
Previous Catawba Brewing Releases Small Batch Blood Orange IPA
Next The Battle of Pancakes: Soft vs. Hard Drinks