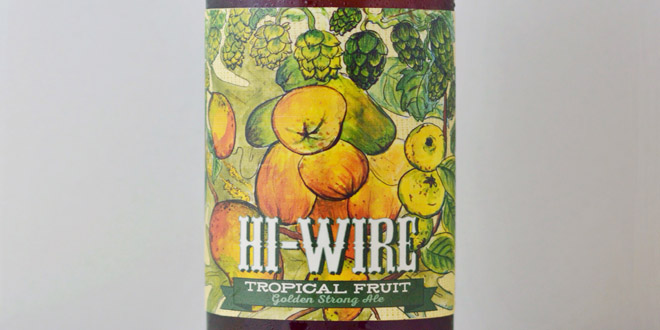 “I love bright tropical fruit flavors,” said Parks. “I grew up in Miami where mangos and papayas grow everywhere. When I smell this beer, it reminds me of home.” 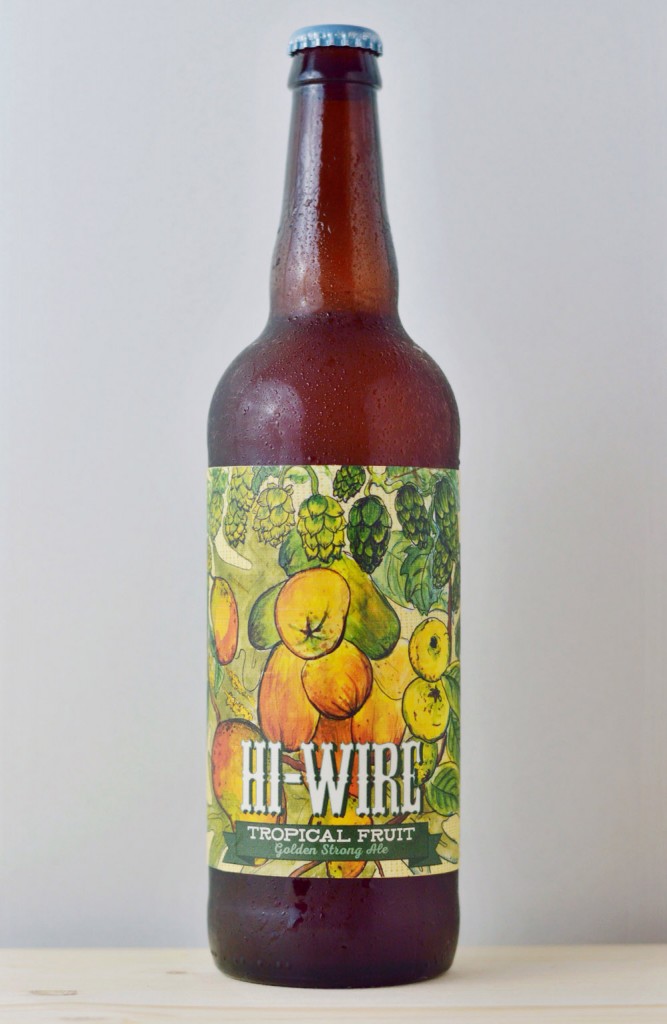 Along with the tropical fruits, a cooler fermentation temperature and an extended cellaring time allowed this beer to clean up and smooth out the edges. The resulting ale has a dank, sticky flavor profile that doesn’t drink like an 11.3% ABV beer.

“The goal was to create something that was big yet very drinkable, a beer that would combine the simplicity of tropical fruit with the straightforward flavors of a traditional golden strong,” stated Parks. “I wanted to create a beer that was as clean and drinkable as possible despite its high alcohol content. I wanted this to be a dangerously drinkable beer.”

Hi-Wire’s Tropical Fruit Golden Strong Ale will be available on shelves in 22-ounce bottles starting in Mid-December. This one-time release will have very limited draft distribution in bars and restaurants across North Carolina as well as South Carolina and Tennessee.

Hi-Wire Brewing’s South Slope Brewery and Taproom was converted into a specialty brewery when they opened a 27,000 square foot production facility (2 Huntsman Place, Asheville, NC) in July 2015. While the production facility produces all of Hi-Wire’s flagship beers and seasonally rotating ales and lagers, the specialty brewery is the experimental arm of the business. Both facilities have taprooms and sixteen rotating taps.

Located in Downtown Asheville, NC, Hi-Wire Brewing is known for producing approachable and balanced ales and lagers, most notably it’s Hi-Wire Lager, Prime Time Pale Ale, Bed of Nails Brown, and Hi-Pitch IPA. Awarded the most medals at the 2014 NC Brewer’s Cup and Best New North Carolina Brewery of 2013 by RateBeer, Hi-Wire’s award-winning beers can be found on draft and bottles in North Carolina bars and retail shops as well as in their downtown Asheville tasting room. In July 2015, craft beer drinkers can also enjoy Hi-Wire beer at their Big Top, a 27,000 square foot production facility opening in Biltmore Village, a half mile from the Biltmore Estate. In addition to flagship beers, Hi-Wire offers a rotating selection of seasonal brews as well as specialty brews from their Ringmaster's Reserve Series. Learn more about the company at hiwirebrewing.com
Previous Fresh Off Close Encounters Release, Space Jesus Returns to Asheville
Next New IPA To Highland Brewing Company’s Beer Line