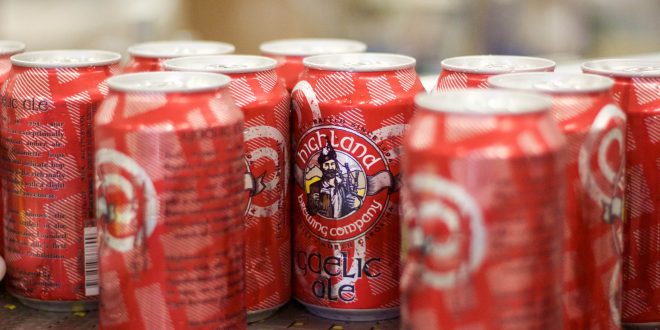 Towers of empty ruby red beer cans await being filled and chilled at Highland Brewing. When they are released on September 16, Gaelic Ale will go outdoors in a big way. Brewed and bottled since 1994, 12-ounce cans will be available in all areas where Highland is sold. Gaelic Ale has long been the top-selling native beer in North Carolina. The addition of cans makes the beer more welcome outdoors, which is often where Highland staff are found.

“With bottling and canning operations, we are in a new chapter. And Gaelic is the right beer to package both ways because of its flexibility – its medium body and balance.” said Leah Ashburn, President. “It fits with food or on its own, in cool or warm weather. Gaelic cans will be with me on my next hike.”

This rounds out their already strong line of canned options. Earlier this year Highland Pilsner debuted in cans, followed mid-summer by Mandarina IPA. With their flagship now in cans, Highland plans to expand can distribution. Over the coming months, look for Highland cans in all their distribution areas: North Carolina, South Carolina, Florida, Georgia, Alabama, Tennessee, Virginia, Ohio, Kentucky, and Washington, DC.

The first access to Gaelic Ale cans is at the brewery release on Friday, September 16, 4-9pm. Guests may purchase cans to go. They may also stay for a classic draft pour and hang out in the meadow, indoor tasting room or rooftop beer garden. Free live music and food trucks will complete the scene. The event is free.

We want to be the brewery of choice in the Southeast. To achieve that goal, we believe it takes more than great beer. With each new hire, it doesn't take long to learn Oscar's mantra: Honesty, integrity and respect. Nothing about beer, not specifically. But the larger ideals that lead to great beer - caring about how it's made, caring for the people involved, from the grain farmer to the mom at the grocery store. Operating within these lines gives rise to a culture around a product. A culture that is sustainable for our employees, our customers and our environment. Come see us! Get a beer at Asheville's first legal brewery and learn what we believe in.
Previous HiWire Brewing Announces Dual Small Batch Sour Bottle Release
Next Stand-up Comedian James Adomian To Play Asheville Nov 11