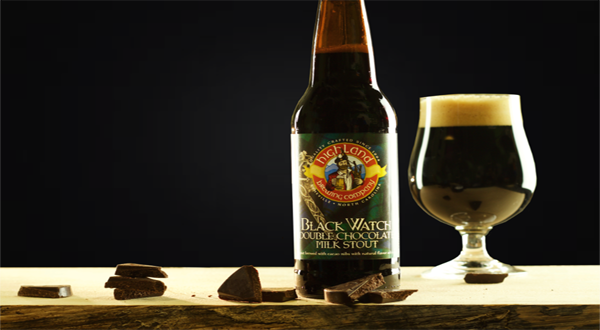 “Black Watch was an overnight sensation last year. When the pilot batch was on tap, there was daily talk among our team. We had this totally natural and exciting staff engagement around this beer. Then the public release created an instant following,” said Leah Ashburn, President. “It’s so much fun to see people react to the chocolate sensations, from the first sniff through the finish.”

Originally brewed in Highland’s Pilot Room as a staff collaboration with lead bartender J. Unger and pilot brewer Paul Rollow, the beer quickly achieved notoriety. Quite simply, it is the chocolatiest beer Unger and Rollow could make, and Highland’s regulars couldn’t get enough.

Brewmaster Hollie Stephenson scaled up the recipe for the first time last year, combining one pound of cacao nibs per barrel with five malts, roasted barley, and flaked oats to create a rich, high-gravity ale reminiscent of brownie batter and marshmallows, with an aromatic nose and a lingering dark chocolate finish. This year, chocoholics are clamoring for the release.

Black Watch will be available for purchase on draft and in four-packs in Highland’s Tasting Room on Friday, November 25, from 2 p.m. to 9 p.m. Free live music starts at 6 p.m. and local food trucks will be on site. Four-packs and draft will also be available in limited quantities throughout Highland’s nine-state distribution network.

Black Watch is a double chocolate milk stout named for Scotland’s Black Watch, the historic military regiment that protected the Scottish Highlands. Brewed with five malts, roasted barley, flaked oats and one pound of cacao nibs per barrel, we created a rich, high-gravity ale reminiscent of brownie batter and marshmallows, with an aromatic nose and a lingering dark chocolate finish.

We want to be the brewery of choice in the Southeast. To achieve that goal, we believe it takes more than great beer. With each new hire, it doesn't take long to learn Oscar's mantra: Honesty, integrity and respect. Nothing about beer, not specifically. But the larger ideals that lead to great beer - caring about how it's made, caring for the people involved, from the grain farmer to the mom at the grocery store. Operating within these lines gives rise to a culture around a product. A culture that is sustainable for our employees, our customers and our environment. Come see us! Get a beer at Asheville's first legal brewery and learn what we believe in.
Previous Historic Biltmore Village Celebrates Christmas The Dickens Way
Next Sierra Nevada Wins Gold And Silver at European Beer Star 2016