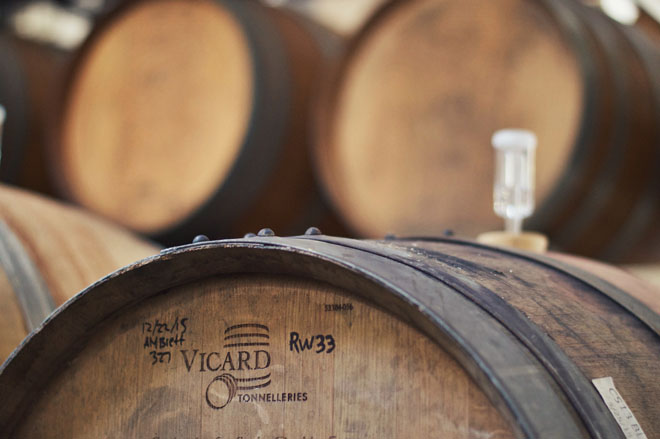 Sunday, September 18th at 1:00pm, HiWire Brewing will be releasing Batch #7 of their Single Barrel Series, as well as a small batch wild ale called Sour Heady Porter for $15 per bottle. The bottle release will start at 1:00pm at their South Slope Speciality Facility that solely produces Sour and Wild Ales.

Batch #7 of the Single Barrel Series is an Oak Fermented Mosaic Wheat Ale with Brettanomyces (5% ABV). This easy drinking wild wheat ale, with notes of juicy tropical fruit and funk, was brewed with a single, 1lb per barrel, hop addition of Mosaic Hops. This beer was oak fermented in a red wine barrel with a specific blend of brettanomyces that exhibits tropical fruit flavors before being bottle conditioned.

The other bottle being released is a one-off-batch called Sour Heady Porter, an Oak Fermented Wild Ale with Raspberries (8.5% ABV). Sour Heady Porter is the brainchild of one of our cellarman, John Hedberg (affectionately known as Heady), and Specialty Brewer John Parks.

This complex sour porter, with notes of bright raspberry, oaky red wine, dark chocolate, and a deep acidity, displays characteristics of a raspberry porter with the added complexity of wild yeast and lactobacillus. It was oak fermented in a red wine barrel for 8 months before being bottle conditioned.

Single Barrel Series releases are HiWire Brewing’s build up to their wild & sour program’s official launch, scheduled to happen this fall. Production of these beers are limited to 120 bottles each and will not see distribution. Join HiWire at 1:00pm on September 18 to get your hands on these special, limited beers.

Located in Downtown Asheville, NC, Hi-Wire Brewing is known for producing approachable and balanced ales and lagers, most notably it’s Hi-Wire Lager, Prime Time Pale Ale, Bed of Nails Brown, and Hi-Pitch IPA. Awarded the most medals at the 2014 NC Brewer’s Cup and Best New North Carolina Brewery of 2013 by RateBeer, Hi-Wire’s award-winning beers can be found on draft and bottles in North Carolina bars and retail shops as well as in their downtown Asheville tasting room. In July 2015, craft beer drinkers can also enjoy Hi-Wire beer at their Big Top, a 27,000 square foot production facility opening in Biltmore Village, a half mile from the Biltmore Estate. In addition to flagship beers, Hi-Wire offers a rotating selection of seasonal brews as well as specialty brews from their Ringmaster's Reserve Series. Learn more about the company at hiwirebrewing.com
Previous Asheville Tea Company Begins Brewing
Next Highland Brewing’s Gaelic Ale Available in Cans