Home » Beer » In the woods with the Wicked 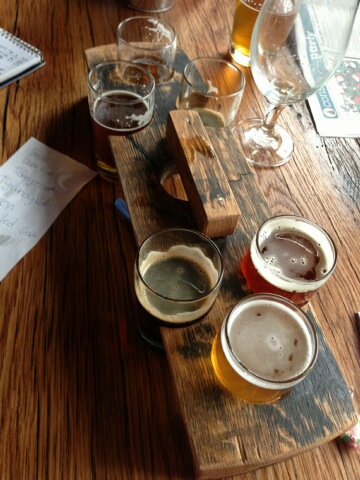 In the woods with the Wicked 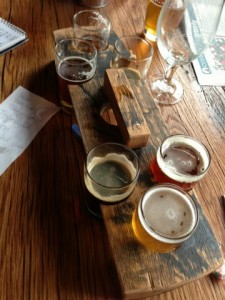 Wicked Weed, Ashevilles’ newest taste topic who had originally intended to open on the 21st, welcomed A-Town to pull up a thirsty stool December 28th, 2012. And bring in the New Year they most certainly did, with 15 specialty craft made brews. Half American, half Belgian style ales, lagers, stouts and sours. The best part is they plan on having more to come throughout the year.

I didn’t have a chance to find out what the staple beers were but I did get a taste of 7 delicious ales, all with Wicked Weeds wickedly clever titles:

Freak double I.P.A. (8.4%)
Dark age burbon stout (10.5%)
Transgressor red (7.2%)
Vixen cocoa stout (8.8%)
Bedeviled golden strong (9.4%)
Black angel cherry sour (5.6%)
I was concerned at first that two guys from Dogfish Head wouldn’t have the flavor and style to compare to Ashevilles unique scene and culture. But gladly mistaken I was. This beer is on point.

The freak double IPA hints at the 60/120 minute IPA but lacks the sweetness, which in my humble opinion, is a good thing. Citrus hops immediately punch me in the face and leave me wanting more right before noticing the subtle sweetness calming me back into my bar stool.

The dark age bourbon stout takes off where a lot of barrel aged stouts fall short. It isn’t ‘hot’, considering its strong A.B.V. weighing in at a hearty 10.5%. Its actually unbelievably smooth with a hint of bourbon close to the finish.

My wife would shoot me in the face if I didn’t mention the Bedeviled golden strong (9.4%). A classic Belgian, reminding me of a dubble with its banana and plum notes. With a soft, golden glow like a yellow haired child in a field of daisies on a warm summer day, perfect for a cold winter evening.  The strength of this beer is deceiving, drink if you dare but remember they have half pours and at some point you’ll have to drive back home where there isn’t any beer, and Luke doesn’t own to-go cups …I asked.

A beer enthusiasts, MistaMoody is a home brewer who basks in the beer scene of Asheville. This enthusiastic blogger is constantly hitting the streets to bring you the latest and greatest brew information.
Previous Pub Cycles Voted In
Next Beer and Now: The Future!