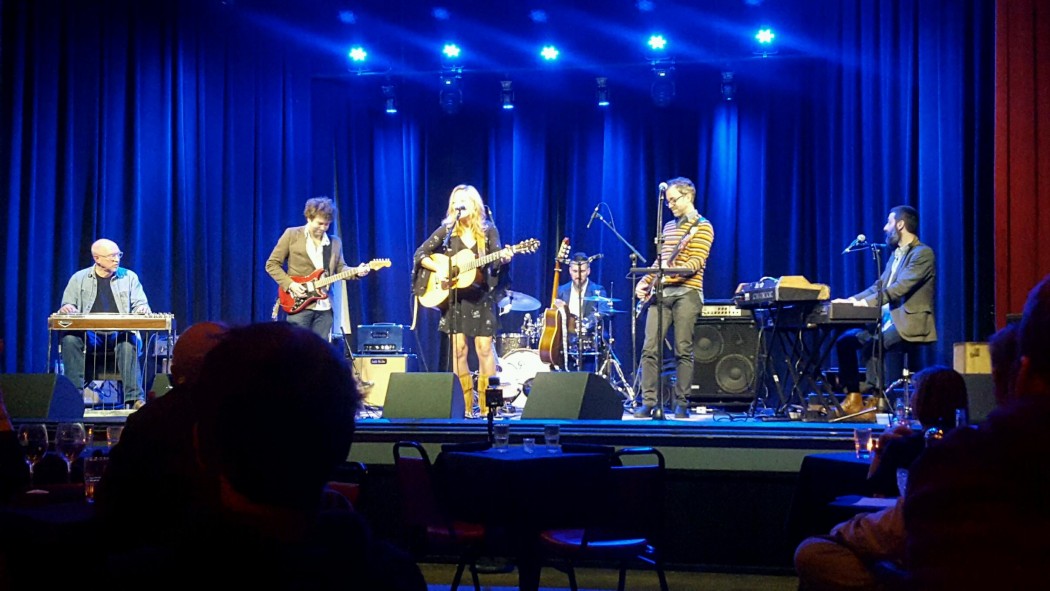 North Carolina native Jeanne Jolly is out and about showing off some impressive material from her new album, “A Place To Run.” On Friday November 13th at Isis Music Hall in West Asheville, Jeanne and the largest band she’s ever brought to Asheville took a captivated audience through a whirlwind of well blended Americana and soul. Isis Restaurant and Music Hall provided a great venue with some excellent food and a large and unique drink selection before, during, and after the show while Jeanne Jolly and friends provided a captivating show to go along with it.

Jeanne, along with a group of energetic musicians who joked like old friends, took on a lot of material from the new album in a “grittier” fashion, the theme of the evening. They went deep into the instrumental gaps throughout the album, which resulted in some great blues-heavy guitar solos from lead guitar player, long time friend, and Co-Producer of “A Place To Run,” Chris Boerner. Jeanne Jolly’s infectious smile and attitude got the crowd clapping along early and kept everyone involved throughout the night.

Highlights of the evening came when the group performed a stretched out version of the melodious and uplifting new song “Boundless Love,” with Nick Baglio keeping the rhythm. Another high point came during an experimental and slightly psychedelic crescendo at the end of the already hypnotizing tune, “California,” in which bass player Roger Gupton added the effects of a synthesizer to take the song to a new level. The crowd favorite of the night came when Jeanne took on the opening track of her new album, “Matches and Gasoline,” with Allyn Love making some beautiful sounds on the steel pedal guitar throughout.

Jeanne and company also took on a couple of surprise covers, including a very soulful version of the tune “Oh Me Oh My (I’m a Fool for You Baby),” made famous by Aretha Franklin. Taking on an Aretha Franklin song takes some guts, however Jeanne delivered an impressive vocal performance while the band proved their ability to move throughout multiple genres. Jeanne decided to have even more fun and got the entire crowd singing with a cover of the very fun sing-along song “That’s All” by Phil Collins with James Wallace providing the iconic and rhythmic piano to end the night on a fun note.

Jeanne Jolly will be showcasing her new album again at a release party at the Lincoln Theatre in Raleigh, NC on Saturday, November 21st.

Since moving from Virginia in early 2014, mainly for the craft beer and the live music, I’ve been involved in following both very actively. My herbalist girlfriend and I also enjoy getting out in nature with our dog, wildcrafting the edible and medicinal flora and taking in the beautiful scenery. My past experience in graphic design and working with signs landed me my first job in Asheville, where I was fortunate to meet a lot of up-and-coming as well as long established local business people. Now I am a salesman for Arcdyn Inc., a local wholesale security camera distributor, while writing about beer and music as a hobby. I am also very excited to be a part of the Asheville Blog team!
Previous Asheville Citizens Raise Questions About Jonas Gerard
Next Wicked Weed Brewing To Pre-Sell Angel of Darkness