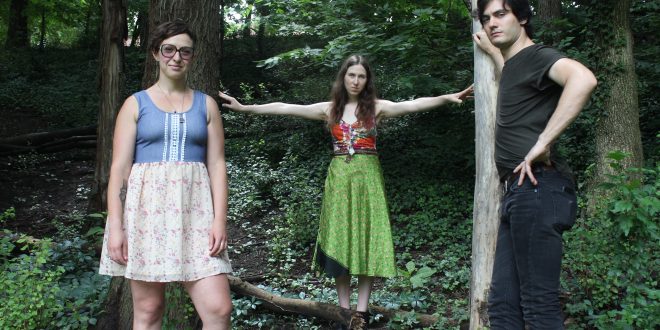 Marian McLaughlin is a singer, songwriter, and guitarist pushing the boundaries of folk music. Weaving together imaginative lyrics, intricate classical guitar work, and rhapsodic delivery, she creates songs of exquisite detail. McLaughlin works closely with arranger and multi-instrumentalist Ethan Foote, who leads ensembles large and small in accompanying McLaughlin, including for an NPR Tiny Desk Concert in 2014 and for her 2015 album Spirit House, the follow-up to her 2014 debut album Dérive.

Marian will be playing a show at The Mothlight in West Asheville Tuesday, August 23rd. We sat down with Marian for an interview about her first time playing in Asheville with her new bandmates who form the Marian McLaughlin Trio.

Q: You’ve been playing in the DC/Baltimore area for quite some time, and you spent some time touring up in New York and Massachusetts this year.  What motivated you to come down south and book a show in Asheville?

A: A simple answer…Asheville is wonderful!  I’ve visited numerous times over the years and I’ve always enjoyed my time there.  DC and Baltimore are my home-base cities, and Buffalo is becoming another go-to spot since our cellist Katie Weissman lives there.  We often start our tours in Buffalo and end them in DC, or vice versa.  There are lots of cities in between Buffalo and DC, and we find that touring regionally is somewhat sustainable.  For this tour, we decided to add more dates so we could bring our music to Virginia and North Carolina.  I’m actually from Virginia, so I have friends all over the state.  We’re looking forward to playing in some new cities!

Q: During this tour you are accompanied by Ethan Foote, whom you mentioned in your Tiny Desk Concert with NPR has been working up some really beautiful string arrangements, as well as the very talented Katie Weissman on cello to help bring those arrangements together.  What goes into deciding the accompaniments in your touring band?

A: Ethan and I have been working together for over three years. We started collaborating in 2013 while I was recording my first album.  I shared some demos with him and he came over to jam on the songs.  He had mapped out a chord chart for one of the songs, which was really awesome since it was my first time seeing some kind of theoretical notation for my music.  I loved all of the ideas that he brought to the table, and it was also the first time I played with someone who really seemed to understand where I was trying to go with my songs.  Around that time, I asked Ethan if he wanted to try playing the songs at shows, and from that point on, he kept writing parts to other songs.  It grew from there. We went from playing as a duo to having strings on some songs, to working with a full ensemble for Spirit House.

As cool as it would be to tour with the ensemble, it’s definitely not a sustainable option.  Since our project is modular, we thought it’d be cool to tour with a smaller setup.  Touring as a trio works out really nicely, we all vibe together on and off stage.  We’re really dedicated to the music and we also split up the workload for managing tours…for instance, someone handles administrative stuff for one leg of the tour while someone takes on the other.  We’re also able to express a dynamic range of sound with the three instruments.  I feel incredibly blessed and honored to have this opportunity to work extensively with Ethan and Katie.

Q: And while we’re on the topic of NPR Music… In an interview with Bob Boilen, you mention the strategy known as Dérive which undoubtedly inspired your first album of the same name.  Is your latest album, Spirit House, driven by the same theory or are there any new concepts you’ve since learned about that you utilize in your songwriting and performances?

A: For a while I saw parallels in the concept of my songwriting to the theory of dérive, which, in a nutshell is to go on an unplanned journey and to let your surroundings guide you through your experience.  I still feel like I relate to this practice when it comes to songwriting.  I begin a lot of my lyrics on walkabouts, where an idea spontaneously pops up in my head and I’ll start stringing together thoughts in a stream-of-consciousness manner.  I feel like walking without a set route in mind helps clear the mind and invites fresh thought patterns to evolve.  It’s also nice to sing along with your body’s movement and rhythms.

As for my guitar-playing, my approach is very intuitive.  I like to seek out interesting patterns and shapes. Sometimes I also see similarities to collaging and songwriting, assembling little bits and pieces here and there and stitching them together to create something unexpected.

As time progresses, I feel like I am getting a better grasp on songwriting and I am understanding the elements more.  Even though my writing can have a meandering nature, I try to make my songs come across as cohesive.  Once I have an initial idea, I’ll start chipping away at the marble to give the song form.  I want some of the songs to have storytelling elements.  I want to have character and plot development, and I want to convey a message.  Sometimes my songs will be a bit lengthy, but it’s hard to stop once I get started.  I think it’s important for people to write and share long-form music with unusual structures.  That’s they way people have shared songs and stories for centuries and it’s something that should continue even as music morphs into many forms.

Q: According to your Facebook Page you have been in the studio lately, should we expect any new material anytime soon?

A: Yes! We had a day off this past Thursday and we were trying to figure out how to spend it.  Someone offered us free studio time and we jumped on that opportunity.  I’m currently working on material for a third album and in July, I sent three demos over to Ethan so he could write arrangements for the tour.  It wasn’t until our first rehearsal together in August (two days before our first show of the tour) that I heard how the arrangements sounded with my songs.  I always enjoy Ethan’s contributions and know that they’ll add a lot to the music.
During our recent trip to the studio, We recorded higher quality demos of the new songs.  I hope that one of the songs will be in good enough shape that I could casually release it this fall before our U.K. tour.  I have a whole vision for my third album and I’m really excited to write and perform the new material!

What: First time playing in Asheville

Where: The Mothlight 701 Haywood Road

Since moving from Virginia in early 2014, mainly for the craft beer and the live music, I’ve been involved in following both very actively. My herbalist girlfriend and I also enjoy getting out in nature with our dog, wildcrafting the edible and medicinal flora and taking in the beautiful scenery. My past experience in graphic design and working with signs landed me my first job in Asheville, where I was fortunate to meet a lot of up-and-coming as well as long established local business people. Now I am a salesman for Arcdyn Inc., a local wholesale security camera distributor, while writing about beer and music as a hobby. I am also very excited to be a part of the Asheville Blog team!
Previous My Drunk Kitchen’s Hanna Hart Films in Asheville
Next Wicked Weed Brewing and Creature Comforts Announce Juiceless IPA