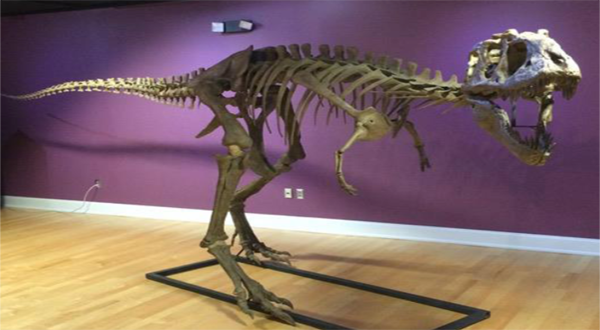 Colburn Earth Science Museum will host a hard-hat tour and unveil its first new exhibit for the Asheville Museum of Science. In conjunction with the North Carolina Science Festival, taking place through April 24, 2016, the Colburn will present their newly purchased dinosaur – a Terataphoneus curriei. Similar to a sub-adult Tyrannosaurus Rex, the Terataphoneus curriei was discovered by paleontologist John Hankla, who will be at the museum for the unveiling.

The event will be held at the Colburn Earth Science Museum in Pack Place from 4 pm to 6 pm on April 20th. The program will include a dinosaur presentation at the Colburn and will conclude with a walking tour to the future Asheville Museum of Science (AMOS) and the Collider in the Wells Fargo Building, adjacent to Pritchard Park downtown.

Colburn Earth Science Museum is an official partner host of the 2016 North Carolina Science Festival presented by the Biogen Foundation. The Colburn will host five more events during this year’s festival:

For more information about each of these events visit www.colburnmuseum.org.

I grew up in Western North Carolina, and like many who grew up here, left for bigger and better things. I ended up choosing to come right back where I started. I have lived in cities from Manhattan to San Francisco to Atlanta. Asheville is my favorite. After getting a master’s degree in journalism with a public relations focus, my first job was with an agency in Greenville working on crisis communications for the hospital system. That began a career where I’ve handled almost every job there is in PR/marketing /media, from copywriter to media buyer to event planner to salesperson. I was in the trenches during the first dot com boom and bust and worked with Google before it became a verb. I’ve written regular columns for publications on beauty products and how to navigate the internet.
Previous 19th Annual Kiwanis Biltmore 15k/5k Classic
Next HiWire Brewing Announces Inaugural How do you LagerFest?