Beer brewing is an interesting hobby.  There is a lot of chemistry as well as some baking and cooking skill, which I suppose is also chemistry.  Back on March 5th I brewed what the recipe told me was an ESB.  Now, certainly I am not faul...

Not my usual, but nice 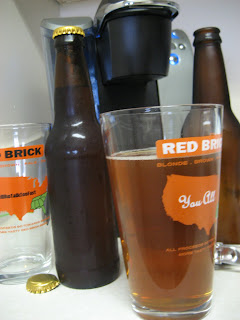 Beer brewing is an interesting hobby.  There is a lot of chemistry as well as some baking and cooking skill, which I suppose is also chemistry.  Back on March 5th I brewed what the recipe told me was an ESB.  Now, certainly I am not faulting Austin Home Brew.  In the hands of a more skilled brewer, this may be the best ESB ever.  In my hands, it is not at all unpleasant but I wouldn’t characterize it as
an ESB at all.

Yesterday, Matt and I cracked open the first two bottles. Uncapping made the perfect “Pfft” noise that is musical to a brewer’s ears.  At least with that noise, you know you probably don’t have a dud. We poured it into glasses.  The color was a lovely orange gold.  It it pretty clear, but might clear more over time. It smelled like beer, but not like I expected though I couldn’t place  the aroma.  So, finally, we tried that first taste.  It tasted Belgian.  Not like a really amazing brewed-by-monks Belgian beer, but like a pretty good attempt by an American brewery at a Belgian style beer. It wasn’t the least bit unpleasant, but not at all what I was expecting.  As I continued to sip at the beer, some of the more ESB qualities began to shine through.  Perhaps the flavor profile will change over the next few days or weeks as well as it continues to condition in the bottles. I have also not yet cracked open the Party Pig so that might be a different experience than the bottles as well.

I am not unhappy about this beer, but I do wonder what I did in the process to cause this to happen.  We have a modified brown beer in the carboy as we speak so I’ll be curious how that one turns out as well. That is kind of the fun part about beer.  After you do all the work, you have to wait a while to see what really happens.

I also got a couple of books for my birthday.  Designing Great Beers by Ray Daniels and Radical Brewing by Randy Mosher.  I have already started devouring the Ray Daniels’ book and I have already learned a few things that will help with our next batch – specifically about calculating the original gravity.

Laura M. LaVoie is a freelance writer living in Asheville North Carolina. She lives in a 120 square foot house in the mountains north of Asheville with her partner, Matt, and their hairless Sphynx cat, Piglet. The tiny house is off the grid and the couple generate all of their power through solar panels and collect all of their water from a natural spring. When not living off the grid, Laura enjoys the beer culture of the Asheville area, voted Beer City USA 4 years in a row.
Previous Girls a-Brewin’!
Next Chocolatey and Roasty