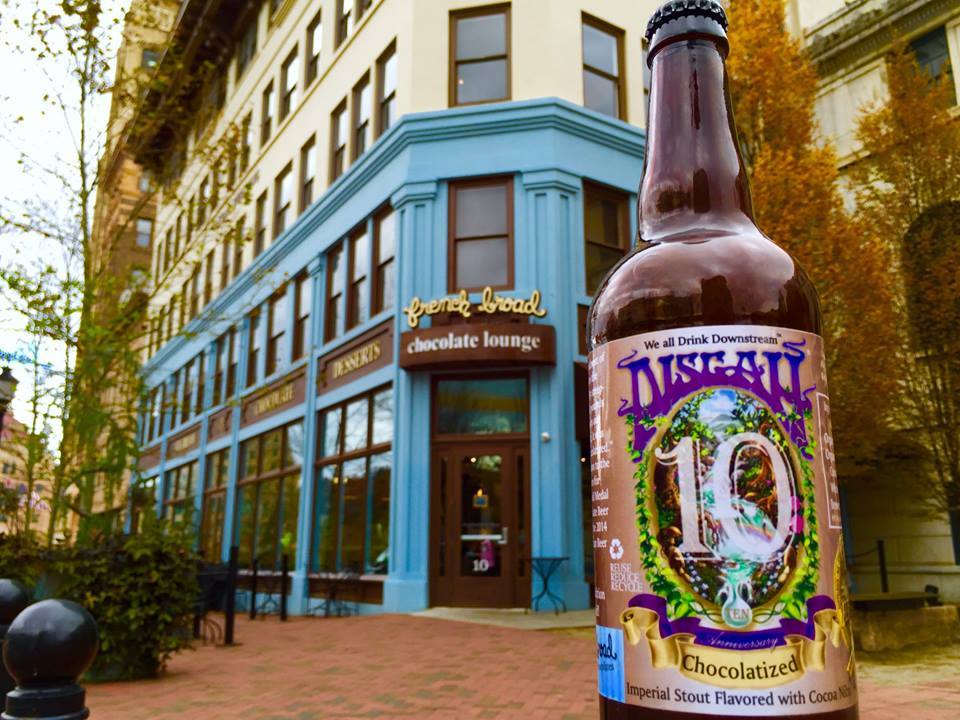 Pisgah Brewing Company in beautiful Black Mountain is a popular destination for both locals and tourists who enjoy the local Asheville beer.  Their well known regulars like Pisgah Pale and Greybeard IPA are found at nearly every bar and restaurant around town, as well as their excellent seasonal selections.  This week, however, Pisgah started pouring and selling bottles of a very special beer, dubbed Chocolatized.  This Imperial Stout earned them the Gold Medal in the Chocolate Beer category at the Great American Beer Festival (GABF) 2014, undoubtedly the largest event of the year in the American craft beer industry.

Once you try this beer, you’ll understand exactly why it was given the Gold.  From the first smell, the roasty dark chocolate sends your mind spiraling back to memories of hot cocoa on a cold winter day, this embodies everything you’d imagine a Chocolate Beer would be. The brewers at Pisgah added a whopping 25 lbs of raw cocoa nibs from French Broad Chocolates in the 5 barrel batch.  They also revealed that they are aging some of the 2015 batch is now resting in bourbon barrels for aging, but a date for the release of that is “yet to be determined.”

Pisgah decided to host an official online presale for the 22oz bottles of Chocolatized, as well as some entertainment from The Ends and delicious food provided by Happy Lucky Food Truck.  Unfortunately, there won’t be any more bottles sold, as only half of the allotment made it into bottles for now, but it is on tap at the brewery for a very limited time!  So hurry in to their taproom and try a glass along with some of their great fall seasonals.  They have live music in the taproom all week as well!

Since moving from Virginia in early 2014, mainly for the craft beer and the live music, I’ve been involved in following both very actively. My herbalist girlfriend and I also enjoy getting out in nature with our dog, wildcrafting the edible and medicinal flora and taking in the beautiful scenery. My past experience in graphic design and working with signs landed me my first job in Asheville, where I was fortunate to meet a lot of up-and-coming as well as long established local business people. Now I am a salesman for Arcdyn Inc., a local wholesale security camera distributor, while writing about beer and music as a hobby. I am also very excited to be a part of the Asheville Blog team!
Previous World Premiere of ‘Chasing Rainbows’ Comes to Flat Rock Playhouse
Next New Year’s Eve Celebration with stephaniesĭd & Jon Stickley Trio at Isis on Dec 31, 2015