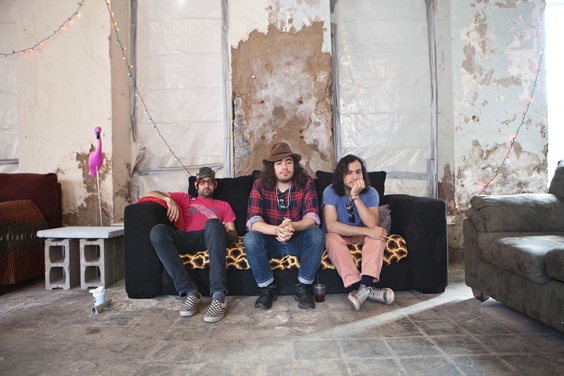 Purling Hiss at The Mothlight March 2 2014

The Purling Hiss sound is revered by discerning listeners for its devastational waves of guitar rock crashing atop sweet melodies and pile-driving rhythm tunes alike. These contrasts in the hands of Mike Polizze impact upon buzzing pleasure centers for each listener, more of them with every lick – people who like rock songs and like to sing along and don’t mind a little dirt for their trouble, live or on record. In a best of both worlds scenario, you’ve got a hot “new” Hiss LP in one hand and a Hiss concert ticket in the other… and so it shall be! Purling Hiss announce a country-wide tour of the U.S.A. in March and the release of Dizzy Polizzy on April 22nd! 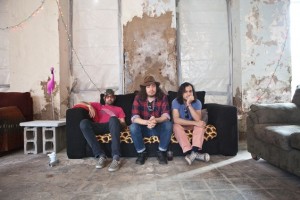 It takes balls to let Purling Hiss get in your face- their records are a half-corroded, screaming roar of high-end guitars crushed together, obliterating vocals and drums with their singular assault. Well, if you’ve got balls, get ready to swing ’em! With Water On Mars, Purling Hiss have broken out of the basement, run through the bedroom and are now loose, out in the streets, blasting one of the great guitar albums in the past couple minutes. Yes, Water On Mars, from the swirling sound of Purling Hiss!

Water On Mars is Purling Hiss’s first recording outside the fuzzy confines of Mike Polizze’s inner rock utopia, where the first three albums and EP were constructed in solitude with a home-recording setup. Over the past couple years, Polizze’s been working with a band and fine-tuning new songwriting ideas while playing shows all over the place. Now there is a center to the Hiss maelstrom, with Polizze’s guitars slugging, sizzling and spiraling their way around the rhythm throb, singing disaffected in shifts both aggro and slack (and around to the back) through the course of a song, with production highlighting the schiz by buffing the raw power into a streamlined blast. If that doesn’t rattle your caveman brain, nothing will! Purling Hiss have a deeply satisfying way of drawing from the red, white and blue wells of 60s, 70s, 80s and 90s rock to inform their own sound, giving things a retro ring while doing what they do in the Philadelphia of today – and no other time could apply, really. So bring your neanderthal face out to space, grab a glass, and prepare for a pour from Water On Mars, Purling Hiss’ first banger for Drag City!

Dizzy is kind of the more innocent sister to Public Service Announcement, sweet songs and mini-ragers, a baby version of the squalor that would soon grow too much hair in all the right places. Dizzy Polizzy serves up the beginnings of the what would become Purling Hiss, going all the way back to 2004, building off solid, breakfast-of-champion prototype-sounds from the likes ‘Halen and Neil Young and head-butting them in a Hissier direction.

Originally conceived as a tour only cassette, Dizzy Polizzy will now be on LP for the first time ever, to tide Hiss-heads over while Purling Hiss works on their next LP (COMING SOON!), one sure to meld the evolutions of Water On Mars with the devolutions of the now-defined Dizzy Polizzy strain. This we gotta hear! And so do you! But first, you should add the wild young rock visions of Mike Polizze and Purling Hiss to your out-pile!

The Purling Hiss @ The Mothlight

This article was brought to you by one of our awesome staff writers. Some of our writers don't want the fame and glory that comes along with being awesome, so we respect their privacy. Want to tell them how good their work is? Write a comment below and leave them some love!
Previous Asheville Small Plate Crawl Experience 2014
Next Historic Biltmore Village Welcomes 3 New Merchants