Home » Outdoors » Riverlink Seeks to “Name That Creek” in Kenilworth 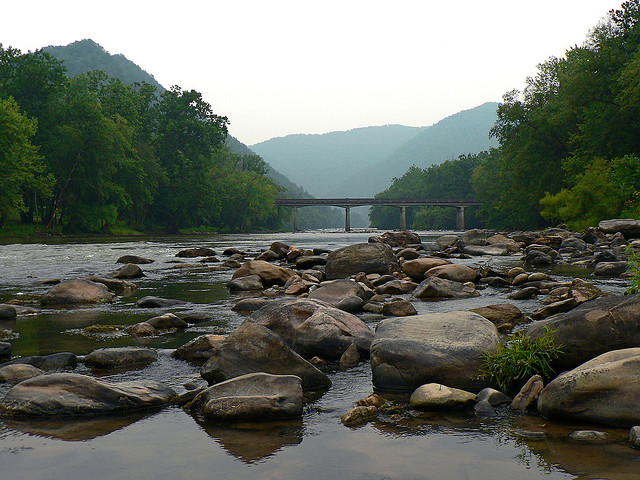 Riverlink Seeks to “Name That Creek” in Kenilworth

RiverLink seeks to “Name That Creek” in the Kenilworth neighborhood

With the help of the City of Asheville and the Kenilworth Residents’ Association (KRA), RiverLink’s Name That Creek program is set to name a new stream. This one flows through the Kenilworth neighborhood, which is located between downtown Asheville, Biltmore Village and the Biltmore Estate.

Name That Creek is a long-time project whereby RiverLink asks local neighborhoods to propose names and the Asheville community to then vote for the most fitting name.

The Kenilworth neighborhood is bordered by Tunnel Road on the east, Swannanoa River Road on the south, and Biltmore Avenue on the west, and situated on high land above the Swannanoa River. Touted as Asheville’s “pioneer suburb,” Kenilworth was founded in 1914, born a town before it was annexed by the City of Asheville in 1929. The stream up for naming flows southward along Norfolk Street, and continues under Wyoming Road and Kenilworth Park.

The KRA is committed to enhancing the quality, safety, and beauty of the neighborhood. Informal discussion about the stream-naming among volunteers working on a litter cleanup project this spring led to an agenda item on the KRA board meeting. The concept was met with approval among board members and an investigation of how this might be done resulted. Three proposed names were approved by consensus in a June, 2016 board meeting.

Three names were suggested by the residents, and can be voted on by visiting http://riverlink.org/help-us-name-creek-kenilworth. The candidates are:

Louise Gibson Creek: The Gibson family lived and farmed for many years on the land where the stream begins. Louise Gibson was born in 1928 in what is now part of the Kenilworth community. She and her husband George lived on the south slope of Beaucatcher Mountain where they farmed, tended chickens and cows, and raised their family of five.

Beaucatcher Branch: Beaucatcher Mounatin, just north of the neighborhood, is a very prominent landmark in Asheville providing outstanding views both to the east and to the west. Beaucatcher Mountain bears a tunnel through the mountain (1927) to Asheville. Next, a significant cut was created (1980) to allow Interstate 240 to pass through and easy access to roadways both east and west resulted.

Norfolk Run: This stream, also known as a run (from the word runnel: small stream) borders the quiet Kenilworth street named Norfolk. There are only six residences on Norfolk Street and naming this quiet waterway for it will help establish the name of Norfolk in this old neighborhood. It was possibly named Norfolk for the county in East Anglia (England) and is in keeping with the English theme of Kenilworth in its founding early in the 20th century.

After a name is chosen, Asheville City Council would vote to have it submitted to the United States Geological Survey Board of Geographical Names. If approved, it eventually would become the official name for the creek. Since the project’s inception, RiverLink has sponsored four successful creek name changes with the help of community volunteers:

For more information, contact Dave Russell at RiverLink, 828-252-8474, Ext. 11, or dave@riverlink.org. To find out more about RiverLink and its many programs championing Western North Carolina waterways, visit http://riverlink.org.

RiverLink is a regional non-profit spearheading the economic and environmental revitalization of the French Broad River and its tributaries as a destination for everyone to work, live and play.

RiverLink accomplishes its mission by providing permanent public access to the river through conservation and recreation easements, reclaiming contaminated lands for public use and enjoyment, greenway development, creating public no-fee, no-reservation overnight camping sites along the river, adaptive reuse of historic structures, educating 5,000 students K-12 annually as well as the public-at-large about the French Broad River watersheds’ importance and empowering over 1,700 volunteers each year.