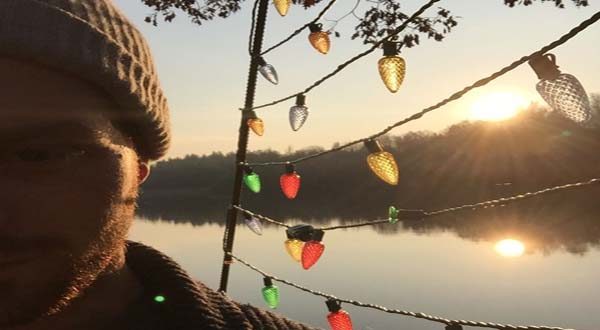 You may recognize the music of singer/songwriter RIVVRS from his song “Ready To Begin” as the theme song for the NFLs Monday Night Football during the 2016 season.  He also has had songs featured on television shows like the Netflix original series “Flaked,” as well as “Bates Motel” on A&E.  Most recently, the song “I Will Follow You” was recently featured in the NBC series, “About A Boy.”

RIVVRS released his debut full-length album earlier this year, which was featured on iTunes.  He’s been out touring to support the album and will be bringing the show to New Mountain AVL tonight.

We were lucky enough to have the opportunity to sit down with RIVVRS and ask him a couple questions about his music and the latest tour.

You have a pretty extensive tour coming up!  Have you been to this part of the country before or are these the first RIVVRS shows in the Midwest and on the East Coast?

This is the very first time.  I’ve definitely done some traveling in my life, but I’ve never actually been to your city and I’ve never spent that much time at all on the East Coast.  I’m very excited to see it all!

You had a new album (Unfamilar Skin) released in March of this year, I know one particular song seems to have gotten a lot of traction on TV, especially in the athletics world and on a couple of new TV shows.  What was the process like writing your latest album?

That one was actually very nice because I don’t have a whole lot of pressure in terms of a record label or anything like that.  So while I was writing that album I didn’t really have one of those – There can be moments in song-writing where you feel like you’re kind of forcing something –  and I didn’t really feel that with this, which was great, so the process was very relaxed.

Also, because the songs were written over a course of about 2 years, so once I had a real big back catalog of songs that I thought were my strongest work I started kind of trimming the fat, and taking the best ones, then trimming the fat some more.  I had like 20 songs that got whittled down to about 8.  I had a few other ones that I wanted to release on the record, but I decided to kind of hold them back, and those are songs I think you’ll start seeing come out in the next couple of months.

I was going to ask if you had any new tours or releases coming up in 2017 but it sounds like you definitely do.  Can you tell us more about that?

Yeah, absolutely.  I have a lot of music still, and I’m always writing new stuff so I’m always adding to that catalog.  I still have about six or seven strong songs that I want to start releasing in the next year.  And I’m going to release a new single called Change.  And that actually comes out this upcoming Friday, so I think it’s available for pre-order now.

Do you have a band that you usually record with in the studio or that you take on the road.  And is it always the same group of musicians or does that change frequently?

Well that’s the process is I don’t actually have a band.  For the recordings I played most of the instruments myself, and then I’ll either hire a drummer out, or depending on who I’m working with, like if I’m writing the songs with somebody who’s a good drummer, sometimes they’ll just play the drums.  But there’s no real set cast characters, I’d say.  I just just kind of have RIVVRS as the main umbrella, and then the common denominator is me.  I do hire out good friends who have been pretty consistent for  the last six or seven months, where we’ve been playing a lot of shows together.

But this tour I’m actually going to be playing solo, so I’ll be doing all of my songs by myself.  I’ll try to make it a little interesting with, like, some piano, play some electric guitar, harmonica and stuff.

What artists did you listen to growing up that sort of developed your sound?

Well I love, the number one that comes to mind is Tom Petty.  My dad, of course from his generation was very much into the 70s and 80s music.  So Tom Petty was one that kind of was really introduced to his music at a really young age.  I’ve always really loved Tom Petty and the Heartbreakers and even further back.  Um, I really like Paul Simon, and I really like Van Morrison, and those are kind of like, the old school ones.

But when I was like, probably 12 or 13, when I first started wanting to play music – I was actually in a really heavy rock phase – like AC/DC and Black Sabbath, and that’s what I really thought I wanted to do.  Then at like thirteen or fourteen I obviously went a little more Tom Petty, I think.

As far as your song, Ready To Begin, which is now on Monday Night Football, and a couple of other TV shows.  Do you have sort of a made-for-TV sound or can you tell us how that process works?

No, not really.  I mean, I’ve been really lucky.  My manager is a former music supervisor, so he’s just got a lot of connections in that world of kind of like, sync and placement.   I get that question a lot where people are like, “did you write this song for this, or this for that?”  It’s really not, I’m just getting my catalog licensed.

So in this particular case, for ESPN, I actually got an email myself.  I never really receive direct emails for licensing, it’s usually through a company called Primary Wave.  And then by the time I hear about it, it’s usually already kind of established.  But in this case I just got a random email from ESPN directly, I thought it was junk mail, so I kind of ignored it.  And then after I looked at it again it was basically saying, “Hey, can we use your song in Monday Night Football for the 2016 season?”  And I didn’t really think it was going to happen, and sure enough about 6 or 7 weeks later was when they had the first game.  I didn’t actually find out until I was watching it and I heard it.

Other than that, yeah it was very surreal.  I’m a San Francisco 49ers fan (unfortunately) and it was the first game of the season so we were watching it as fans, and just to have that kind of connection to it was really cool.

You were touring, opening for some other artists like Gary Lightbody from Snow Patrol.  Who do you relate to and maybe like an idol in a sense, someone you would like to work or tour with?

Well you know who I went and saw recently that I would love to tour with, though I don’t know how good of a fit it would be – I guess somewhat – would be Alabama Shakes.  I think that they put on, probably the best live show I’ve seen in a long time.  I mean, I go to a lot of live shows and there’s something about them that’s just really stood out, and their music I love.  And they had Dawes open for them on their last tour, and if I could get in on that bill that would be great!

Those guys are all in a different league though, and you know, that’s the thing about this tour is this will give me a lot more experience on the road.  I’ll be playing a little more consistently than I have in the past, so hopefully it’ll open up those opportunities.

Well we’re looking forward to the show and can’t wait to see what the future holds for RIVVRS.

Thanks.  I’m really excited to see your city and see what you guys are all about.  Looking forward to it!

Keep up with RIVVRS on this exciting tour by following his Facebook Page and be sure to check out his show at New Mountain tonight!

Since moving from Virginia in early 2014, mainly for the craft beer and the live music, I’ve been involved in following both very actively. My herbalist girlfriend and I also enjoy getting out in nature with our dog, wildcrafting the edible and medicinal flora and taking in the beautiful scenery. My past experience in graphic design and working with signs landed me my first job in Asheville, where I was fortunate to meet a lot of up-and-coming as well as long established local business people. Now I am a salesman for Arcdyn Inc., a local wholesale security camera distributor, while writing about beer and music as a hobby. I am also very excited to be a part of the Asheville Blog team!
Previous Thanksgiving Meal Boxes for Families In Need
Next Comedian Josh Gondelman at The Millroom December 3rd