I just got back from a tip to South Africa. If you want to read the general recap, you can check it out at our Tiny House Blog.One of the things I wanted to experience while we were there was the local beer culture. I quickly learned that there really ...

I just got back from a tip to South Africa. If you want to read the general recap, you can check it out at our Tiny House Blog. 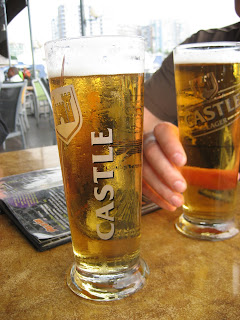 One of the things I wanted to experience while we were there was the local beer culture. I quickly learned that there really wasn’t much of one. There is a single macrobrew company, South African Breweries, which is a subsidiary of SABMiller. It turns out that all the the available beers are owned by this same company. Coming from the rich and diverse American Craft Brew movement, this was a bit of a shock but we did find that several of the beers were quite tasty.

Lagers appear to be the most popular style. Only one of the available beers was an ale, and that was a stout. Here are the beers we experienced in South Africa, ranked from least favorite to favorite.

Hansa Pilsner
This was a not-bad-at-all drinking beer, but it lacked a bit of personality. It was a little better than the typical American Pilsners – like Budweiser and Miller.

Castle Lager
Similar to the Hansa, regular Castle Lager isn’t much to write home about but it is still better in general than most mass produced American Beers.

Castle Draught
However, Castle Draught is essentially the same thing as Castle Lager but a little better. It has more of an Octoberfest taste, still a Lager but richer than their regular offering.  I found this one a reasonable beer experience.

Hansa Marzen Gold
But speaking of Octoberfest, Hansa had a Marzen available that was better than the Castle Draught.  Marzen is the actually style of the traditional German Octoberfest beers.  It is typically brewed in March, which is what Marzen means, and stored cold underground until the September festivals in Munich.  I’m not entirely sure that the Hansa beer is a true Marzen but it was drinkable.

Castle Milk Stout
My favorite beer in South Africa, however, was the Castle Milk Stout. Milk Stout is one of my favorite styles of beer in general so I was excited to give this a try.  It doesn’t match my favorite microbrew milk stout, but I found int on par with some other American versions of the style.

It is interesting to note that I don’t know that I would have liked any of these beers if it hadn’t been for the American Craft Brew Industry. I knew off the bat that most of these beers weren’t brewed with the style and quality of a good craft beer.  That was made clear when I read the ingredients and Corn was on all of the lists. In the US, corn and rice are used as fillers by the corporate beer industry.  This was very apparent in the Castle Draught and the Hansa Pilsner but it was less obvious in the Milk Stout that had enough other things going on to mask it.

South Africa is certainly not going to be known for it’s beer culture, but what they had available were passable and, in the instance of the Milk Stout, not bad at all.

Laura M. LaVoie is a freelance writer living in Asheville North Carolina. She lives in a 120 square foot house in the mountains north of Asheville with her partner, Matt, and their hairless Sphynx cat, Piglet. The tiny house is off the grid and the couple generate all of their power through solar panels and collect all of their water from a natural spring. When not living off the grid, Laura enjoys the beer culture of the Asheville area, voted Beer City USA 4 years in a row.
Previous Pomegranate Wheat Beer was somewhat successful
Next Happy Holidays from Beer and Now!