Home » Featured » The Collider: Scientists and Experts Discuss the Reality of Climate Change 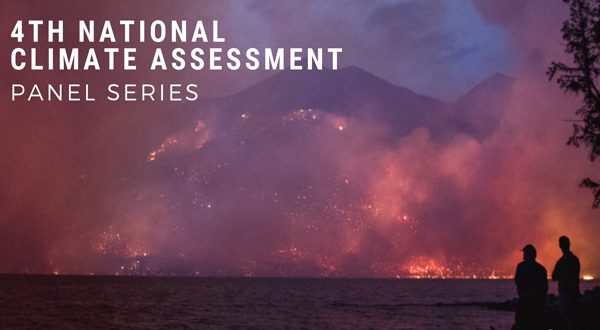 The Collider: Scientists and Experts Discuss the Reality of Climate Change

The Collider is hosting a two-part panel series with local climate scientists and experts, many of whom worked directly with the fourth National Climate Assessment — also known as the NCA4. The first in this series of panel discussions will take place on Thursday, January 24, from 4:30 to 6:00 p.m. at The Collider. Admission is free and open to the public with a suggested donation of $10 per person.

“The Collider is honored to host authors of the fourth National Climate Assessment for a thought-provoking overview of the assessment and its findings for western North Carolina,” says Megan Robinson, Chief Operating Officer at The Collider. “It’s an opportunity for us to connect the globally significant work being done in Asheville with our supporters and the public.”

The Collider will announce more details about the second in this series of panel discussions in early February.

Susan Joy Hassol, Tom Maycock, Laura Stevens and Dr. Ken Kunkel will be among the experts on the first panel.

Susan Joy Hassol is a climate change communicator, analyst and author known for her ability to translate science into English. She has been making complex issues accessible to policymakers and the public for more than two decades. Susan also served as the senior science writer on previous National Climate Assessment reports.

Tom Maycock has served as the science public information officer for the North Carolina Institute for Climate Studies (NCICS) since September 2014. In addition to managing communications for the Institute, Tom is a science editor with NOAA’s Assessments Technical Support Unit (TSU). He was also a lead editor on both Volumes I and II of the NCA4.

Laura Stevens provides primary science and technical support for the National Climate Assessment through NOAA’s Assessments TSU and NCICS. Her research involves the analysis of observational and climate model datasets. Her work has led to the development of several figures included in NOAA’s State Climate Summaries and Volumes I and II of the NCA4.

Dr. Ken Kunkel serves as lead scientist for NOAA’s Assessments TSU through NCICS. In this role, he served as a lead author on both Volumes I and II of the NCA4. Dr. Kunkel’s research primarily focuses on historical climate variability and trends and on potential future change — particularly related to extreme events such as heavy precipitation, heat waves, cold waves and winter storms.

On November 23, the U.S. Global Change Research Program (USGCRP) announced the release of Volume II of the NCA4. Volume II, Impacts, Risks, and Adaptation in the United States, assesses a range of potential climate change-related impacts, with an aim to help decision-makers better identify risks that could be avoided or reduced. The assessment follows Volume I, the Climate Science Special Report(CSSR), which USGCRP released in November 2017.

Volume II of the NCA4 draws on the expertise of more than 300 authors from federal, state and local governments, industry, academia, tribal organizations and non-government organizations. Its findings are the result of an assessment of over 6,000 unique references, including the CSSR, which provides the climate science foundation for this volume.

Located in the heart of downtown "Climate City" -- Asheville, North Carolina -- The Collider is on the top floor of the newly renovated Callen Center inside the Wells Fargo building in downtown Asheville. Here, coworking, private offices, meeting and event space – fully equipped with world class connectivity – is available to businesses, scientists and innovators addressing climate change solutions. Our world-class facility is just steps away from the headquarters of the National Oceanic and Atmospheric Administration’s (NOAA) National Centers for Environmental Information (formerly known as the National Climatic Data Center), the world’s largest repository of climate and environmental data. For more information, visit www.thecollider.org or email us at info@thecolliderorg.
Previous BROTHER WOLF ANIMAL RESCUE HIRES NEW SHELTER VETERINARIAN
Next MARCH 2019 SECOND SATURDAY in the RIVER ARTS DISTRICT