In November I had the opportunity to travel to South Africa to start working on a project with an incredible group of people.  The organization I work with is called the Zulu Orphan Alliance and they raise money to feed orphans and vulnerable chil...

The Mad Zymurgist: Experimentations in Beer

In November I had the opportunity to travel to South Africa to start working on a project with an incredible group of people.  The organization I work with is called the Zulu Orphan Alliance and they raise money to feed orphans and vulnerable children living in the townships outside Durban.  One of the reasons that Matt and I went over was to start the process of building a shelter for the kids.  The trip in November was more informational – we met the people we would be working with, saw the land where we will be building and got permission from the Zulu Councillor to build.  We can’t wait to go back, but the number one most important thing we need to do now is raise the money.

While we were there, I learned about Zulu beer.  There is no one recipe for Zulu Beer, but it is often brewed with pineapple, oats, and bread and other versions are made with sorghum. I wasn’t able to try any for myself while I was there, but my friend who lives in South Africa tried some traditional beer and got some photos for me.

I was inspired by this beer and wanted to try to make something similar back in the states.  But what I really wanted to do was take the concept and integrate it into a more traditional American style beer. 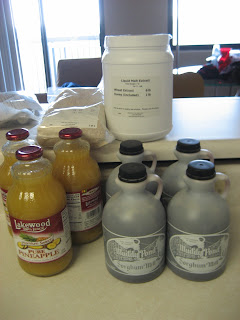 I bought the ingredients.  To replace the bread, I chose a honey wheat extract.  Also, I used a mini-mash of  Belgian Pils Malt, white wheat and flaked oats.  A mini-mash, if you’ve never brewed beer, is where you put all the grains in a cheesecloth bag and soak it in hot water to make a beer tea before adding the liquid malt extract and boiling the whole thing. When I added my honey wheat malt, I also added 3 quarts of sorghum syrup.  I also added Hallertau Hops, a mild German hops that will add just a tiny bit of earthiness to what was going to be a very sweet beer.

Now, here is where things got a little crazy. When the wort was done boiling, I cooled it and put it in the carboy. Then, instead of adding water I added Pineapple Juice.  This is incredibly insane.  This made my original gravity very high, which is one of the measurements that help determine what your alcohol content will be in the finished product. I tasted the wort, which is tradition for home brewers and it was super sweet but potentially very good. It tasted like bread and pineapple. Then I added the yeast to the beer and the real magic will happen over the next few days.  After a couple of weeks it will be ready to bottle and a few weeks after that it should be drinkable.

I have some plans for this beer. I am hoping that eventually I can use it to raise money for the Zulu Orphan Alliance.  Since I am a home brewer, I can’t sell my beer but what I can do is continue to perfect this recipe and then potentially contract brew to get it on the shelves and at the bars. The intention along the way would be for all the proceeds to go back to the ZOA to help feed the kids and build the shelter.  Wish me luck. 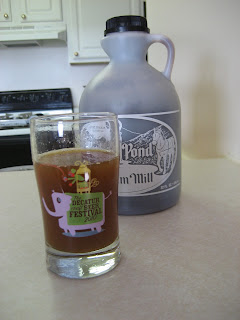 Laura M. LaVoie is a freelance writer living in Asheville North Carolina. She lives in a 120 square foot house in the mountains north of Asheville with her partner, Matt, and their hairless Sphynx cat, Piglet. The tiny house is off the grid and the couple generate all of their power through solar panels and collect all of their water from a natural spring. When not living off the grid, Laura enjoys the beer culture of the Asheville area, voted Beer City USA 4 years in a row.
Previous Happy Groundhog Day and a prayer for beer
Next And then I became a "Beer Person".