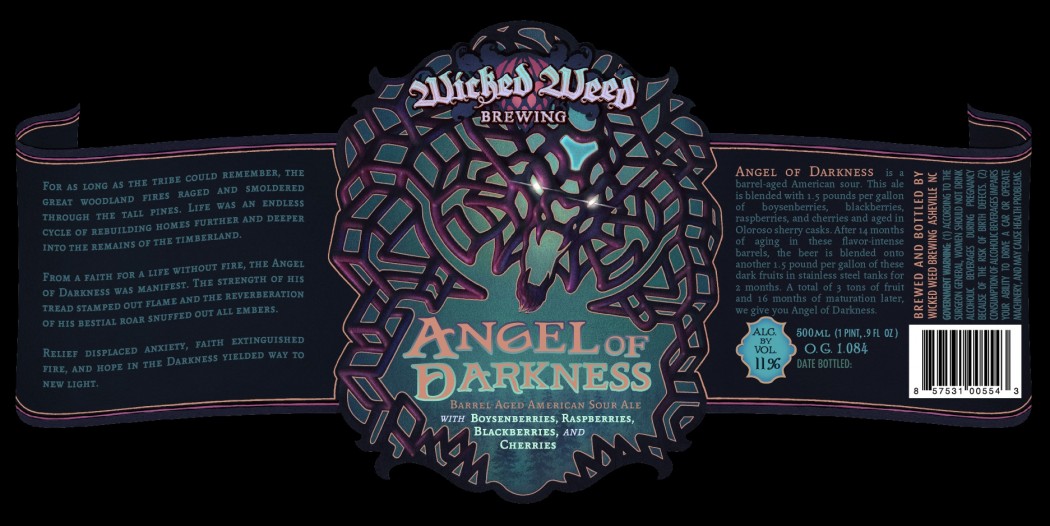 Wicked Weed Brewing is set to pre-sell the culmination of their year long Angel Series: Angel of Darkness this Saturday, November 21st at 12pm (EST) online via Brown Paper Tickets. This American sour ale aged on boysenberries, blackberries, raspberries, and cherries in Oloroso sherry casks spent a total of 16 months in the barrel earning it the title of the oldest and most heavily fruited sour the brewery has yet released.

“When designing this beer we first looked towards our beautiful Oloroso casks for inspiration. We wanted the beer to be a hybrid of fruited sour, Spanish sherry and red wine,” explains Walt Dickson, Head Blender and Owner.

“Angel of darkness has a deep and rich fruit character that when blended with the acidity of the sour beer and the oxidative character of the sherry really leads to a beer like nothing we’ve ever made before.”

“We wanted this beer to be the culmination of all that we had learned about sour beer production up to this point. We used every trick in our bag,” says Dickinson. “Angel of Darkness contains more fruit than anything we have ever produced, it marks our first use of sherry barrels, and it aged in the barrel longer than anything we have ever released. I couldn’t be happier about how it emerged from the barrel.”

The online pre-sale of Angel of Darkness will allow for purchase of a limited number of 12 packs and 6 packs and may be picked up during the on-site bottle release scheduled for Saturday, December 12th at the Funkatorium. In addition to the release of the final Angel, the brewery plans to host their first public barrel sale and barrel education session along with a specialty second bottle release yet to be announced.