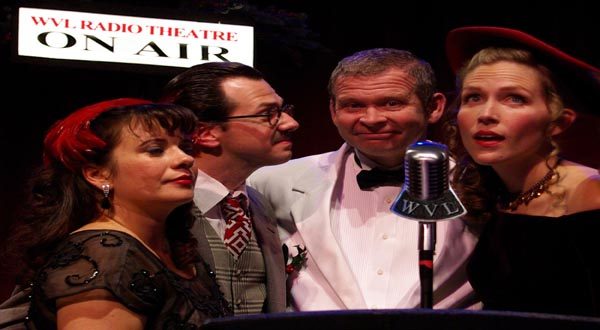 Celebrate the season with a fresh take on a holiday classic.

“This is truly an amazing event and a great way to kick off the holiday season with the entire family,” said Lillianna Woody, who co-owns Isis Music Hall with her husband Scott, sons Harris and Martin, and daughter Josephine.

Set in the failing fictional studio of WVL Radio Theatre, the audience is cast as a live studio audience attending the broadcast of “It’s a Wonderful Life,” circa 1946.

“I love the Wonderful Life story, but when creating this adaptation, I also really wanted to engage the audience in a different way,” said Willie Repoley, ITP producing artistic director.

As the story unfolds, WVL Radio actors are stuck in a snowstorm, leaving only a skeleton crew to try to perform the show and to save the station before it goes under.

“Our live audience is keenly aware that the radio station is being saved literally right in front of them; that by succeeding in the near-impossible task of telling George Bailey’s story of redemption, they are also redeeming the future of the radio station,” Repoley said. “In that way, the audience has two ways into the story, two teams to root for, and a deeper emotional investment in the drama.”

The 2016 tour hits 14 cities nationwide, but the Asheville show just happens to be near and dear to their hearts.

ITP originated as part the NC Stage Catalyst Series in 2004, and now produces plays both independently and as the Partner Company in Residence at NC Stage in downtown Asheville.

“We have performed the show in Asheville more than in any other city,” Repoley said. “We started performing at the Isis a few years ago, and it immediately felt like a great fit. It’s a good size for us, the people who run it are fantastic, and I love that people can come early and enjoy a meal. After all, this is a show about the importance of making personal connections with our friends and neighbors, and this is a great venue to facilitate that.”

Don’t miss this one-night event at Isis Music Hall. Doors open at 5 p.m. for reserved dinner show tables. There is also theater-style & balcony seating available on a first come first serve basis. Tickets are $15 in advance/ $20 at the door. Reservations are highly encouraged. For more information and to reserve your tickets, visit isisasheville.com

This article was submitted by an awesome reader. We gladly publish user submissions. For more about the author of this particular article, we have inserted the author bio at the bottom of the content when it is provided. Submit your own article by following this link: http://ashevilleblog.com/submit-an-article/
Previous Betaplane at Burnpile Harvest Festival
Next Diamond Brand Hosts 6th Annual Step Out and Shop Event