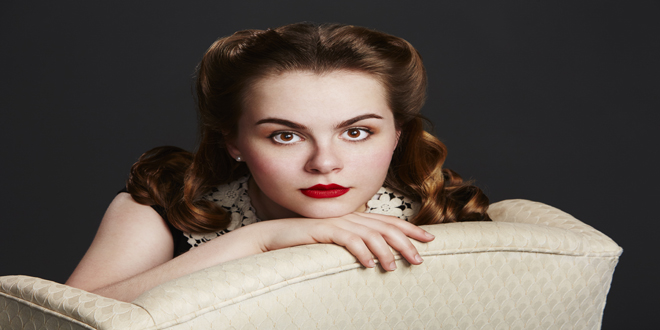 In just a few days, the story of Frances Gumm, better known as Judy Garland, will open at the Flat Rock Playhouse.

The production of about 40 people has been gearing up for weeks to tell the story of the plucky underdog from Minnesota who never took “no” for an answer. Dane Whitlock, Director of Marketing and Communications of Flat Rock Playhouse, says the audience can expect to leave the theater inspired.

“[Garland] was never really known for her beauty, but she was always known for the fact she had so much pluck and drive and determination and of course this beautiful voice,” Whitlock said.

“She kind of beat the odds to win this role in [The Wizard of Oz] that ultimately became one of the most well-known motion pictures of all time.”

Ruby Rakos, a New Jersey 19-year-old with a Broadway past, stars as Garland. Asheville Blog was told Rakos was handpicked for the role.

“Tina Marie Casamento Libby (the show’s creator) was doing a workshop and Ruby walked into the audition and sang “Zing Went the Strings of My Heart” and Tina Marie knew she had this other project, Chasing Rainbows, in her back pocket that she had been working on” Whitlock explained. “She was like ‘Wow you would be really great for this’.

“[Ruby] is a ringer for Judy Garland. She’s got the look. She’s also got the voice.”

What separates this show from others previously performed at this venue is notable.;”Chasing Rainbows” will have its world premiere at Flat Rock.

Whitlock hopes from here, “Chasing Rainbows” chases a path of its own.<

“After it leaves here it will go to Goodspeed next year and after that and hopefully it will end up in New York!” Whitlock said.

The family-friendly production hits the stage on Friday, Nov. 27 and runs until Dec. 19.