Home » Events » Zombie Tube-Ocalypse Float Is Back for 2015 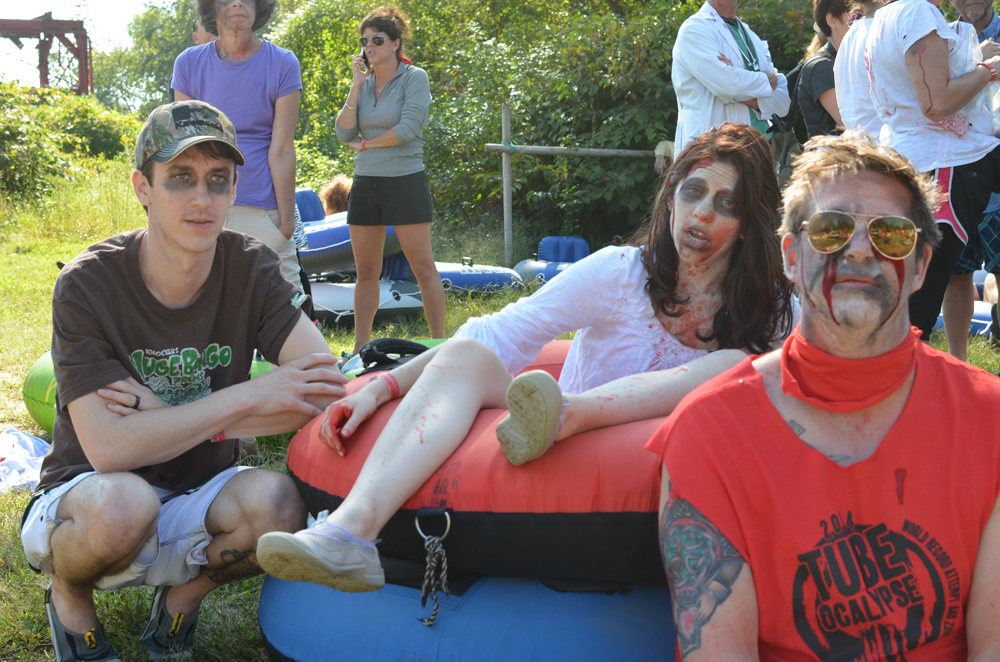 Zombie Tube-Ocalypse Float Is Back for 2015

Zombie Tube-Ocalypse Float Is Back for 2015

Braiiiinnnnssssss! And by that we mean rivers, beer, food and one giant fundraiser! Last year, following Portland, Oregon in the quest for the most interlinked tubers on the river, hundreds of people participated in the first ever Asheville Zombie Tube-Ocalypse! After a wildly successful first year turnout, the Tube-Ocalypse Zombie Float and World Record Attempt is back for a second year! This time it is a shorter float, in hotter weather and with colder beer! This year, the float will start at French Broad River Park and take out at The Salvage Station, located at 468 Riverside Dr. in Asheville, NC.

The format has changed this year in order to benefit three 3 nonprofit watershed protection groups: French Broad RiverKeeper, Asheville Green Works and RiverLink. All proceeds from registration fees will go directly from the zombie crew hands to theirs. The event is still alcohol free until the takeout where beer will be available from Catawba Brewing Company and SweetWater Brewing. During the first attempt, we fell 50 people short of the world record of 620 tubers last year; so lets make it happen this year!

Why zombie themed tubing, you might be asking? Good question! In 2013, 620 folks in Portland, Oregon set the world record with 620 tubers floating on the Willamette River, interlinked. This floating chain was half a mile long. When Zombie Float organizer Ben Wiggins heard about this unique record, he figured that Asheville was up to the challenge. Known for our scenic views, artistic vibe, and laid back southern hospitality, the city of Asheville is constantly compared to the infamous Portland. When the people of Asheville come together to get something accomplished, it never happens quietly or in the usual manner. Which begs the question: why not up the ante with a river full of zombie tubers?

Please check out www.ashevillezombiefloat.com for more info and purchase your tickets online at Eventbrite!

We will keep you posted as more information about the 2015 Zombie Float becomes available. Get your zombie outfits ready Asheville – let’s fill the French Broad!

This article was brought to you by one of our awesome staff writers. Some of our writers don't want the fame and glory that comes along with being awesome, so we respect their privacy. Want to tell them how good their work is? Write a comment below and leave them some love!
Previous Hi-Wire Celebrates Biltmore Big Top Opening
Next The Chocolate Lab Brings The Original Beer City Truffle to Woodfin