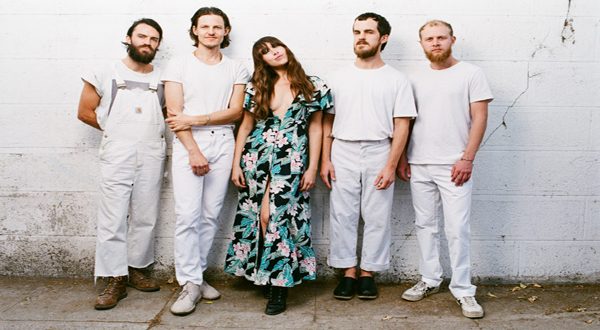 Los Angeles psych pop band Amo Amo today released a playful new single, “Antidote,” premiered with Billboard. The track about separation of mind and body is off their self-titled debut album produced by Jim James of My Morning Jacket, out on April 26. The band is also joining Jim James on a national tour next month and opening for My Morning Jacket at Red Rocks Amphitheater in Colorado this August, in addition to performing at Outside Lands in San Francisco, CA this year.

Amo Amo previously released a video for dreamy single “When I Look At You” from their upcoming album via FLOOD. The track followed singles “When We’re Gone” and “Closer To You,” which gathered more than half a million Spotify plays, as well as heavy rotation on LA tastemaker stations KCRW and KCSN.

Amo Amo formed in June 2017 when a group of dear friends – Love Femme, Omar Velasco, Justin Flint, Shane Mckillop and Alex Siegel – got together for an impromptu session in Los Angeles with Jim James. There had been a premonition that the five of them shared a sort of psychic bond that would lead to a revelation in sound. Five months later, after a month-long recording retreat nestled amongst California’s vineyards and out of range of cell phone service, Amo Amo emerged with a collection of soulful, magic songs.

In the past year, the world has begun to fall under the spell of Amo Amo’s enchanting sound. Legendary mastering engineer Bob Ludwig (Led Zeppelin, Paul McCartney, Nirvana, Bruce Springsteen, Frank Ocean) said “I really love these songs, they are stand outs of the past year for me…Amo Amo has made a very special album.” Jenny Eliscu (Rolling Stone, Sirius XM) added “Rarely do I come across a new band with as strong a sense of self-identity as Amo Amo… their live show is ecstatic.” Catch them on tour soon & stay tuned for more!

***with My Morning Jacket

This article was brought to you by one of our awesome staff writers. Some of our writers don't want the fame and glory that comes along with being awesome, so we respect their privacy. Want to tell them how good their work is? Write a comment below and leave them some love!
Previous Tap Into Your Wild Side at the Brews and Bears Summer Event Series﻿
Next Thirsty Monk Releases Third Of Karma Series Beers, Unity Gose