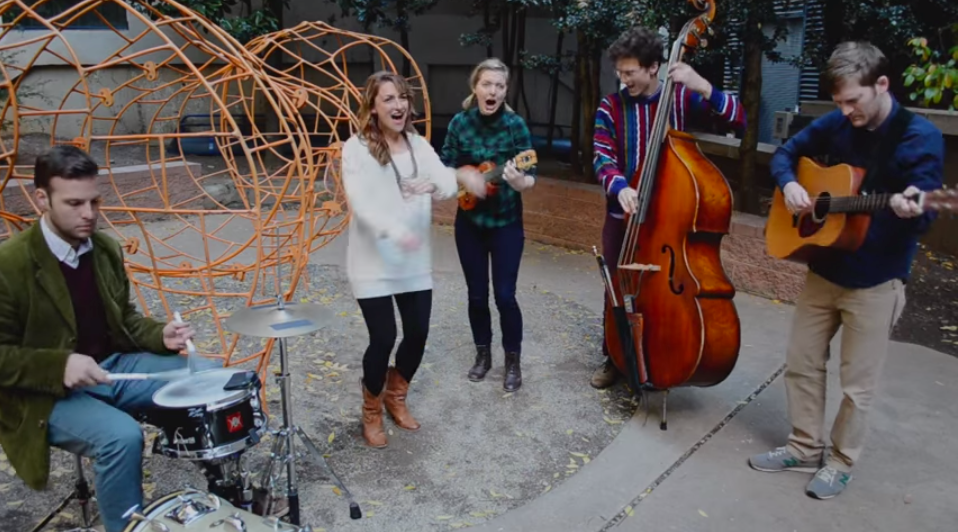 In late 2014, we had the pleasure of meeting New York based band All Boy/All Girl before their performance at Toy Boy Community Theatre. Compromised of seven young adults, this dynamic band showed us a hint of their talent while playing an acoustic set behind Pack Place in downtown Asheville. Led by Danielle Lovier, who sings and plays ukulele; All/Boy All Girl formed in 2010 in Philadelphia. Double Bassist Nicholas Rahn approached Danielle about accompanying her performance after hearing her first set at Rittenhouse Square Park. The duo spent the next 18 months playing together as buskers in Philadelphia as well as touring through 35 states and Canada.

Early 2012, Nick and Danielle relocated to New York City, where Nick began composing new music for the group. Inspired to bring fresh sounds, textures, and creative minds into the fold, the duo assembled a 7 piece band and fully realized their new material. It was then that All Boy/All Girl was officially born.

In 2015, the band unveiled their latest efforts with an EP titled Trophy. Lead single ‘Glitters’ is the headlining act of the EP, and the song the band chose to perform acoustically for us one blustering fall day. Check out their performance of Glitters below, and follow this inspiring set of talented musicians online at www.allboyallgirl.net

This article was brought to you by one of our awesome staff writers. Some of our writers don't want the fame and glory that comes along with being awesome, so we respect their privacy. Want to tell them how good their work is? Write a comment below and leave them some love!
Previous Burial Beer Company Bottle Release: Moon Series Continued
Next Eco-Friendly, Philosophical, Patchouli-Soaked Quipster to Perform in Asheville