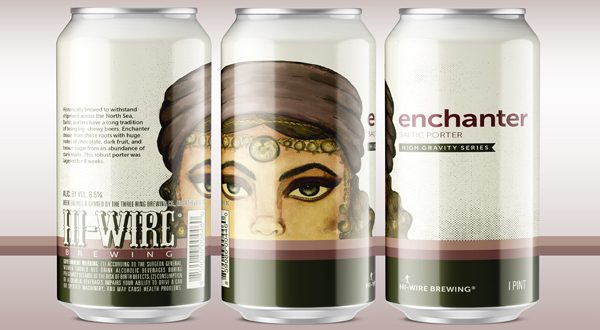 Hi-Wire Brewing has announced their 2019 Release Calendar, with the coming year seeing many returning fan favorites and a line-up of new beers to keep things fresh and build on what was a huge 2018 from the Asheville brewery. Kicking off January Hi-Wire Brewing will be releasing three specialty beers including their fifth version of Hazy&Juicy&Hoppy&Fresh IPA dry-hopped with Mosaic & Wakatu, German Chocolate Cupcake 10W-40 Imperial Stout variant, and Enchanter Baltic Porter. More details below.

Releasing Friday, January 11 from Hi-Wire’s Asheville taprooms is Hazy&Juicy&Hoppy&Fresh No. 5 (7.5% ABV). The fifth batch in this popular series gets Mosaic and Wakatu hops. And as usual – it’s all in the name for this double dry-hopped New England India Pale Ale that is super hazy, juicy, chock full of bright hop aroma, and silky smooth. A grip of oats and a touch of lactose rounds out this crushable, tropical IPA. This beer is available in 4-packs of 16oz cans and will see full distribution.

Returning for the fourth year in a row as part of Hi-Wire Brewing’s High Gravity Series is Enchanter Baltic Porter (8.5% ABV). Historically brewed to withstand shipment across the North Sea, Baltic porters have a long tradition of being big, chewy beers. Enchanter draws from these roots with huge notes of chocolate, dark fruit, and brown sugar from an abundance of dark malts. This robust porter was lagered for 8 weeks. This beer will see full distribution the second week of January and be available in taprooms on Friday, January 11.

Located in Downtown Asheville, NC, Hi-Wire Brewing is known for producing approachable and balanced ales and lagers, most notably it’s Hi-Wire Lager, Prime Time Pale Ale, Bed of Nails Brown, and Hi-Pitch IPA. Awarded the most medals at the 2014 NC Brewer’s Cup and Best New North Carolina Brewery of 2013 by RateBeer, Hi-Wire’s award-winning beers can be found on draft and bottles in North Carolina bars and retail shops as well as in their downtown Asheville tasting room. In July 2015, craft beer drinkers can also enjoy Hi-Wire beer at their Big Top, a 27,000 square foot production facility opening in Biltmore Village, a half mile from the Biltmore Estate. In addition to flagship beers, Hi-Wire offers a rotating selection of seasonal brews as well as specialty brews from their Ringmaster's Reserve Series. Learn more about the company at hiwirebrewing.com
Previous Tracy Buchanan takes reins as chair of YMCA Board of Directors
Next Eliminate Dust and Keep the Home Clean With a Professional Deep Cleaning