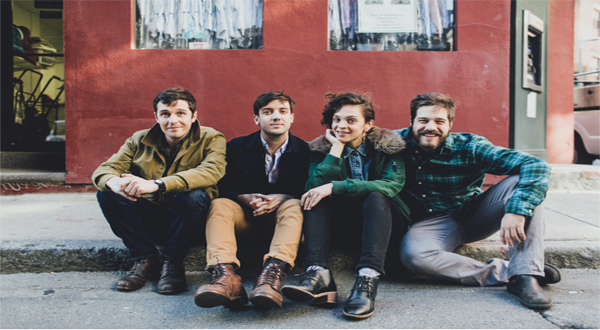 Recently featured by Rolling Stone as an “Artist You Need to Know,” indie-Americana band Mipso releases the official video for the title track from their latest album release, Coming Down The Mountain.

To create the video, Mipso teamed up with acclaimed multi-media artist Ruth Lichtman, who juxtaposes archival footage of the Appalachians with digital rotoscoping work. That intersection illustrates divisions with which the song wrestles—solitude vs. society, old self vs. future self, “natural” vs. human.

Mipso is currently traveling the East Coast and Southeast as part of the Campfire Caravan Tour – a 30+ date U.S. tour featuring Mipso, The Brothers Comatose, and The Lil Smokies.  The tour’s last shows wrap up over the next week – with upcoming stops in Boston, New York City, Washington DC, a hometown play in Raleigh and others before the tour ends in Asheville, NC on Saturday, November 18.  See the full list of upcoming tour dates included below.

With Mipso, The Brother Comatose and The Lil Smokies each quickly rising the Americana music ranks, “Campfire Caravan” is a nod to the musicians’ early days playing music, when they’d perform for friends and family in basements, living rooms, and around campfires. “Campfire Caravan” celebrates the American tradition of gathering communities around music. In an untraditional format, all three bands rotate in the lineup with no single ensemble acting as the tour headliner. A completely different show will be presented in each city with spontaneous collaborations amongst the groups taking place between sets. More information available at www.campfirecaravan.com.

This past spring, Mipso released their highly anticipated new album, Coming Down The Mountain, to rave reviews. It quickly shot up the Billboard album charts and debuted in the Top 5 of the Bluegrass Album Charts, with the single “Coming Down the Mountain” charting at #49 on the AMA Americana Radio Chart.  The album spent weeks at #1 on The Roots Music Report Top 50 Americana Country Album and Top 50 Country Album Charts.  Of the album, No Depression states, “More songs like this and Mipso will corner the market in a new genre. Something like progressive-Americana or Roots-Progressive. What a way to pump life into a once hallowed music form – progressive rock.” Available now CD, vinyl and on all digital service providers, listen to Coming Down The Mountain on Spotify here.

Coming Down The Mountain is Mipso’s fourth album release, and follows up their critically lauded Old Time Reverie (2015).  After a year and a half of intense touring following their 2015 release, Mipso returned to their home state to write and record. Huddling in a friend’s barn on land usually used for growing garlic and training dogs, they collected their ideas, shared influences, and discussed thoughts on what would eventually become Coming Down The Mountain. The album’s ten songs – all originals – finds Mipso exploring the ideas of our changing relationship to the idea of home, and about being pushed or pulled by forces bigger than us.  Produced by Brad Cook (Megafaun), and adding pedal steel, drums, banjo, and keyboards to the mix, the music on Coming Down The Mountain is full of wistful beauty, hopeful undercurrents, and panoramic soundscapes that impart intimacy.

Recent Praise for Coming Down The Mountain

“a back-porch hootenanny set not in an Appalachian holler but in a city, where the songs performed draw from Bill Monroe to David Bowie.” – Rolling Stone

“On this year’s Coming Down the Mountain, the quartet’s winsome Americana is as catchy and easygoing as ever, but with drums added at the behest of producer Brad Cook (Hiss Golden Messenger, Megafaun), it packs a lot of rhythmic pep.” – Rolling Stone

“Mipso’s distinct Southern sound has remained strong over the years, but the band’s evolution and growth is obvious” – Our State

“Though Mipso remains a largely restrained outfit, Coming Down the Mountain’s diverse charms are immediately apparent, and Mipso delivers them with verve.” – Indy Week

“Mipso rise to the top of the vibrant talent pool in the Carolinas with Coming Down The Mountain, honoring the tenderness of their band’s origins as they stay true to acoustics” – The Alternate Root

“For Coming Down the Mountain, Mipso… continue to stay true to themselves while exploring new territory with their songwriting and stretching into new sounds” – No Depression

This article was brought to you by one of our awesome staff writers. Some of our writers don't want the fame and glory that comes along with being awesome, so we respect their privacy. Want to tell them how good their work is? Write a comment below and leave them some love!
Previous A Winter’s Tail at WNC Nature Center Dec 2nd 2017
Next 10 Tips To Vacation Like The Locals In Hawaii