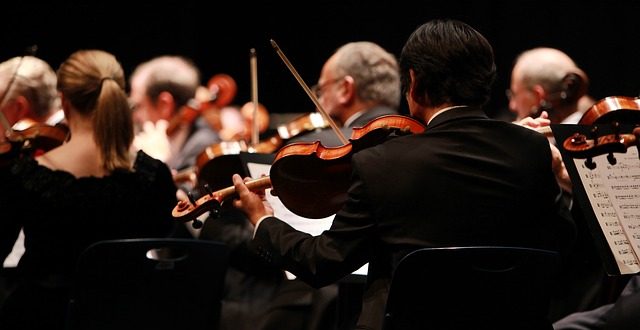 The Asheville Symphony brings Beethoven’s love letter to nature to life with a performance of the Pastoral Symphony on Saturday, February 23 at 8 p.m. Led by guest conductorMei-Ann Chen, the evening also features Kodály’s Dances of Galánta and Dvořák’s Violin Concerto with guest violinist Alexi Kenney. The concert takes place at Thomas Wolfe Auditorium in downtown Asheville.

Guest conductor Mei-Ann Chen is the music director of the MacArthur Award-winning Chicago Sinfonietta and the artistic director and conductor for the National Taiwan Symphony Orchestra Summer Festival. She also holds the title of Conductor Laureate of the Memphis Symphony Orchestra. Chen was named one of Musical America magazine’s 2015 Top 30 Influencers, received a 2012 Helen M. Thompson Award from the League of American Orchestras, was First Prize Winner of Copenhagen’s 2005 Malko Competition, and won several ASCAP awards for innovative programming. A sought-after guest conductor, she has appeared with distinguished orchestras throughout the United States, Austria, Canada, Denmark, Finland, Germany, Sweden, The Netherlands, and the United Kingdom. And, now, she leads the Asheville Symphony in its Masterworks 5 performance.

The program opens with Zoltán Kodály’s Dances of Galánta, a collection of Hungarian village dances reimagined as a symphonic work and transformed with colors of the modern symphony orchestra.

Next, violinist Alexi Kenney makes his Asheville Symphony debut in Dvořák’s Violin Concerto. Named “a talent to watch,” by the New York Times, Kenney is the recipient of a 2016 Avery Fisher Career Grant, winner of the 2013 Concert Artists Competition, and laureate of the 2012 Menuhin Competition. He has been profiled by Strings magazine and the New York Times, written for The Strad, and has been featured on Performance Today, WQXR-NY’s Young Artists Showcase, WFMT-Chicago, and NPR’s From the Top.

The concert’s centerpiece is Beethoven’s beloved Pastoral Symphony, which was inspired by the composer’s love of nature and walks in the countryside. The symphony’s five movements introduce the audience to a series of musical vignettes including “Awakening of cheerful feelings upon arrival in the country,” “Scene by the brook,” “Merry gathering of country folk,” “Storm, Tempest,” and finally “Shepherds’ song. Happy and thankful feelings after the storm.” Fans of Disney’s 1940 film Fantasia will recognize the piece from the film’s fifth segment, which depicts a world of creatures from ancient Greek mythology including centaurs, families of winged horses, cherubs and fauns.

Single tickets for Masterworks concerts are $24–69, depending on seating section (reduced youth pricing is available). Season subscriptions and ticket packages are also available. Tickets can be purchased online at ashevillesymphony.org, by phone at 828-254-7046, in person at the Asheville Symphony office at 27 College Pl., Suite 100, or at the U.S. Cellular Center Box Office.

The Asheville Symphony was born of a passion, formed in 1960 by a group of volunteer musicians — its early concertos filling the halls of local churches and school auditoriums. At that time, and for several years after, the Symphony had no manager and no resident conductor — only a handful of passionate performers that wished to share the classics (and their talents) with the community. Asheville’s arts-focused community — home to generations of writers, musicians and artists — has sustained the Asheville Symphony for nearly 60 years, embracing the orchestra’s endless creativity, artistic expression and collaborative explorations.
Previous Hi-Wire Brewing Announces Plans for Knoxville, TN Taproom
Next Asheville to Host First Drag Brunch to Support Homeless