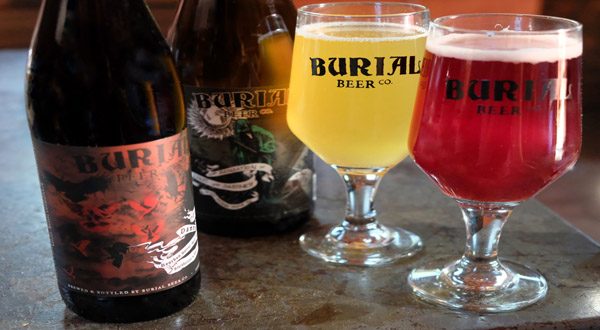 The first offerings from Burial Beer’s Mixed Culture Program are set to release this Sunday, May 28th at 12pm from their South Slope taproom with no distribution of these limited bottles slated. Fall of the Damned is a 500ml Bourbon Barrel Aged Sour Red Ale that began in a Brunelli foudre where it rested for 3 months before moving to bourbon barrels for 9 months and then was blended and racked onto 2lbs of blackberries and marionberries per gallon for additional aging.

The Separation of Light and Darkness (750ml) is the first beer the brewery aged in their 30 barrel oak foedre. A clean saison fermentation was aged on carefully-selected cultures of brettanomyces and lactobacillus for 12 months before dry-hopping with a mild dose of hops.

These two packaged sour offerings are the first beers to arise from their 10 barrel system at their original location and marks the full transition of that brewery into a Mixed Culture and sour facility.

“We have a pretty specific plan for fermentation, which includes at least three separate fermentations for each beer, if not more,” explains Co-Founder, Doug Reiser. “We institute clean fermentations in steel, then brett ferments in our foudres before dropping the pH considerably in small format oak barrels with pronounced bacterial culture. It has been a lot of fun dreaming up the complex steps of each of these beers, some of which are planned years in advance.”

Burial’s Mixed Culture program is centered around the Solera Method which borrows from wine practices of fractionally blending beers of various ages.

“Solera allows us to maintain a fairly stable environment in our oak foudres, not opening and exposing them to the elements, and maintaining their on-going and continual fermentation activity,” says Reiser. “We get to stay consistent with this platform, though each vessel offers a different culture.”

The brewery hopes to offer a robust Mixed Culture program that honors both traditional methods while staying true to the explorative roots that have helped to place them on the map in the southeast.