Home » City Information » Day 6: Open your mind & be yourself at Firestorm. 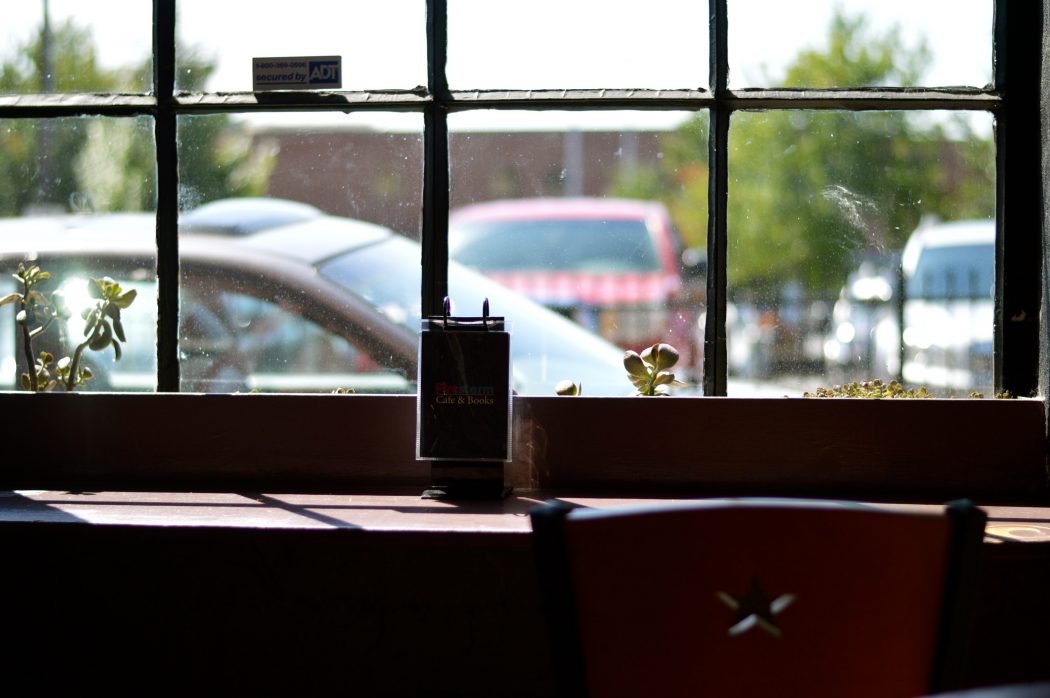 Day 6: Open your mind & be yourself at Firestorm.

i didn’t end up on the wrong side of the tracks or anything (which i usually do in my personal life anytime i explore some place new), but i did leave the comfort of the touristy, main streets of downtown asheville and ended up on a smaller, alley-ish-like street behind all the typical places. but i was so in that kind of mood today.

let me back up. it all started with a nice little walk through pritchard park, a park well-known to ashevill-ians as a place of beauty and unique diversity in the middle of the city. people gather there to rest, to chat, to seek respite, to play games, to dance (on friday nights), to show off their creativity, to mingle, to be alone. and all kinds of people gather there. homeless, families, tourists, couples, hippies, street preachers, protesters, police, photographers, artists, loners. some days it’s full of activity, some days not so much. on this day, i was planning on taking a photo of a tree in the park, which i did. afterwards, i sat down on a bench for a few minutes to bask in the sunshine. soon, a man came and sat on the bench beside me. it wasn’t long before we smiled at each other and then broke into conversation. a 30 minute long conversation about everything under the sun and then some, including practicing counting to 10 in several languages. he was a kind, intelligent man. those kinds of moments and conversations always inspire me and leave me feeling humbled & alive. 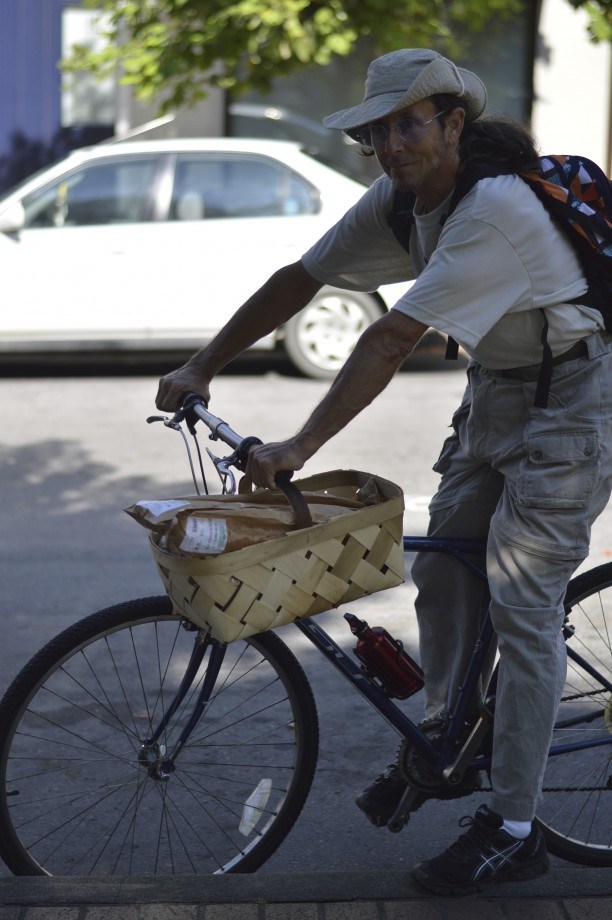 in the midst of our conversation, a man rode up and just interrupted us by saying to me that i was doing exactly what i supposed to be doing. huh? how did he know me? and then i remembered that this exact thing happened to me years ago when i was in alaska. a woman came up to me, a stranger with piecing blue eyes, and said the exact same thing. upon remembering this, i took this guy on a bike a little more seriously. he continued to talk with me and tell me that it was important that i take pictures of people, of asheville, and make the world aware. he then said that so-and-so (insert the name of a minister i know) was very pleased with my work as well. now, this minister that the guy on a bike mentioned is someone i emailed back in the spring as a possible contact person to help me with networking. i have never met this minister face-to-face, but we have emailed each other. so, the guy on a bike mentioning him was just another weird coincidence in a long line of coincidences… or was it? in any case, i heeded the feeling that i was having in my gut: something was happening. things were lining up. the universe was conspiring. god was moving. my soul was bursting. something big was going on. and i knew that i was in the middle of it, no matter if the guy on a bike was crazy, or if he was mistaking me for someone else, or is he was a prophet of some kind. i had gotten a message through his words, like i did before in alaska, and i knew that they were for me. what the message was, i don’t exactly know. perhaps an affirmation of who i am, my dreams, and what i am doing/who i am being. what i did know was this feeling i was having, so i just let it sink into me.

after finishing my conversation with my original guy friend, i ran into that guy on the bike, thomas, three more times during the day. very interesting.

it was both of these interactions with interesting people, that had me in a mood where i felt connected, grounded, and inspired. i felt that this was a day that would mean something. and that i should try something new. not just go to the same old kind of easy, relaxed place, but to embark on something a little different. and boy, did i.

just to the right of the purple thirsty monk building, on the back side, near the cellar entrance of this popular beer hangout, lies firestorm cafe and books. i think i’d been in this cafe one time before, but it was year and years ago. so, today was actually my first real visit. i walked right in the door, without even giving it a second thought. you see? i’ve gotten over my little fear of entering some place new all by myself.

well, i took a few shots of the outside of the cafe and then i confidently walked inside. the first thing i saw was an area of books, which, of course i was drawn to. looking at the titles, i noticed that they were all books on activism, social issues, global issues, sustainable living and anti-capitalism/institution. i realized that this was not your cutesy, downtown tourist cafe. toto, i was not in starbucks anymore.

down a little ramp there was the coffee bar on the right and a few table on the left, including a table with a computer for free internet use by customers. it actually turned out to be available to anyone who walked in – even to just use the computer. and plenty of people did that. cool, i thought. a nice way to be open and welcoming to any and all people, which is a theme running through the cafe/bookstore.

not only is it liberal in its books, and ecologically friendly in its food & coffee, but it is lgbtq friendly as well. the bathroom had a very obvious sign that all people, regardless of gender or gender expression were welcome in any of the bathrooms. and just out side the bathrooms… contraception. for free.

there was clearly a philosophy that ran every thought, word, and deed of this little hidden, dark, coffee shop. you know, come to think of it, i thought of places that you would find in greenwich village (nyc) in the 50s, 60s, 70s. a place filled with poetry slams, open mic nights, and full of radical, free-thinking liberals discussing taboo topics and reading censored books. this is exactly what this place is, only in 21st century asheville.

while i was sipping my regular coffee with almond milk at a table near the front of the cafe, i wrote down some words in my journal which popped into my mind as i sat there:

the barista was a very friendly and intelligent expressing herself in her own unique way… like we all should do. the patrons who came in were from all walks of life, though the cafe was never super duper crowded. there were just enough people at all times. there were charles manson worshippers (i know that for a fact because the man i talked to in the park tried to talk to the charles manson couple about jesus), lesbians planning their day, middle-aged men having a discussion, people on alone on computers, a mentally disabled young man, seemingly in a gang or something like that, who talked with me for about 15 minutes, a few tourists who dropped in for some food, some tough guys, men who i believe used the restrooms to bathe, hippies, middle-aged women sitting and drinking coffee. i’m telling you, all kinds of people. and every single one of them was welcome – just as they are.

it’s like you might feel at out of place when you first walk in, but soon you realize that everyone is out of place. you can’t define this cafe. and so, everyone fits in because no one fits in. get what i mean?

now the thing that makes this cafe really unique, as if all of the above stuff is not enough, is it’s philosophy: it’s a co-op. there is no boss. instead the workers who work there are the owners together. they share responsibilities. and they make their vision well-known with a giant sign over the coffee bar and little charts on every table. they want you to know that this is not a top-down, hierarchical place. instead, it is run by horizontal, equal management. in other words, it’s run by the people. on the tables you can read about firebooks beliefs: providing radical literature, using vegan and organic goods,having free computer resources available to anyone & everyone, providing free event space for sharing knowledge and talent, building community, and mobilizing for social action.

in fact, this evening they were open for a gathering of people who wanted to come & volunteer and prepare activities, posters, etc. for the upcoming international day of peace on september 21. i almost went back, but it didn’t fit into my schedule. but, i will go and take part in some community social action at some point. that’s a promise.

so far, this cafe has been the most intriguing. it has triggered the most thoughts and feelings within me. not that it’s my favorite so far. actually, i don’t have a favorite yet. all of them are my favorite for what they each are. but, this one has made the biggest impression on me. it is a place that i recommend that to you so that you get out of your regular ol’ routine, get yourself ready, open your mind, and get out of your comfort zone. so go. get some coffee. just observe. just listen. just let yourself be. you don’t have to agree with everything… that’s the beauty of it. just be yourself, and while you are there, you’ll find a place that allows each and every person to simply be themselves too. it’s refreshing. and challenging. and a beautiful thing.

for that matter, go check out any community hidden off the main drag. find someplace and some people who are really different, and challenge yourself to go in, open your mind, listen, and soak it all up. you’ll thank yourself for the experience. i promise. besides, this is how world peace is made.

Liz is a blogger, writer, and amateur photographer in Asheville, NC. She is a returning expat, re-adjusting to American life after living in Sweden for the past three years. On any given day you can find her planning her next adventure with her wife, blogging away on her blog (www.belovelive.com) about daily life and social issues, and discovering little hidden gems and secret places in the city. She faithfully totes her camera and her coffee mug everywhere she goes. And she’s always up for a conversation about spirituality, politics, or other taboo topics. You can find her on the web at www.belovelive.com.
Previous Day 5: Gimme Five!
Next Blue Sky Cafe Review 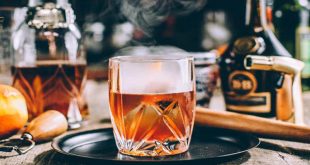 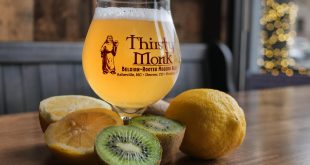