Home » Events » A First Timer’s Reaction To Geek Out 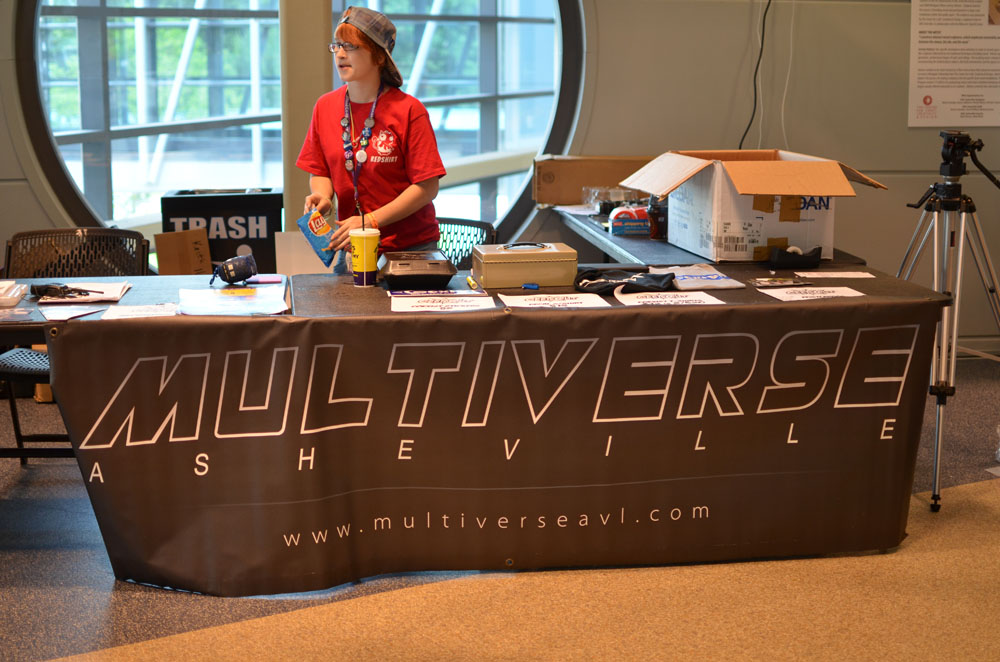 A First Timer's Reaction to Geek Out

A First Timer’s Reaction To Geek Out

This year was my first year attending the local popular arts festival known as Geek Out. As someone who has always been deemed something of a nerd, I was delighted to be surrounded by my fellow geeks, although I have to say that a lot of people are way more dedicated to their craft than I am – and I salute you! Geek Out was a blast and I really enjoyed getting the two day pass to attend both days of the event. It was held at UNCA at the Sherrill Center, and featured panels, vendors, demonstrations, parades, contests, and even a wedding.

Friday June 6th kicked off at Za Pow art gallery downtown with beer and comic style art. There was a live demonstration of body art painting with a semi nude model, who was getting a Za Pow bikini bottom and top painted on her figure by a vary talented artist. When finished the model looked like she had a bikini on, with a sheer white shirt that was partially open. Photographs after the event made me do a double take and wonder at first if the clothing was real or not.

The next day was the real start to the event, and by the time I arrived shortly after 10 am, the event was bustling. I got sidetracked by the DeLorean, the Mystery Machine, and the Ecto 1 sitting outside of the door. Those cars were something sweet – and I am not a car person. Walking into the Sherrill Center was like entering into a every nerd’s biggest dream – a room full of people just as geeky or even slightly more geeky then you are. There were vendors galore, people in full on cosplay mode, and I got to experience my first LARPING (Live Action Role Playing) down in the arena. I have witnessed LARPING – and it was glorious.

I only came away dissatisfied with one facet of the entire event. On Sunday there was a Pony Parade, which was supposed to be an anti bullying parade centered around the My Little Pony movement. Specifically, more or less the ‘brony’ movement that has turned fans of the show into targets by uneducated bullies. There was an instance of this very thing that happened in our community. 9 year old Grayson, fan of My Little Pony, particularly the character Rainbow Dash. He was the target of bullying when he carried his Rainbow Dash backpack to school, where instead of dealing with the behavior itself, school officials simply told Grayson to put the backpack away. The story went nationwide and inspired this little anti-bullying parade at Geek Out, which I was extremely excited about. What a great show of community support. However, I was a bit surprised when the event started without explanation of what it was for – explicit details about the situation were not necessary but a generalized “we are against bullying, we are standing together against bullying, liking things that other people might think are uncool is ok, look at how many people gathered here today enjoying the same things” spiel was almost expected. The literature advertised in the paper also said that Grayson was to lead the little parade – when it started, he actually did not – he simply got lost somewhere in the middle. 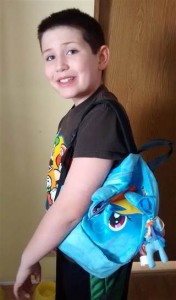 When the parade ended I caught up with Grayson’s mom, his younger brother and even younger twin sisters, all of whom came out to participate in the parade. I really admire Noreen for standing up for her son and challenging the unfortunate assumption that all too often assumed gender stereotypes are causation for bullying. We chatted for a bit, and I was surprised to learn that she had not been comped for entry fees into the Geek Out event. Her family had to pay to come to participate in a parade that her son was requested to lead. As a small business owner I know all too well the narrow profit margins on events, but for a community who rallied so well around a bullied child, I was surprised that the same generosity didn’t cover the entry fees. I know it may not seem like a big deal, but it broke my heart a little bit to see this hardworking family have to pay three admission tickets to get into an event that they honestly didn’t even get to enjoy, as they had to leave right after the parade due to other commitments. The only reason they came out that day was for the anti-bullying parade, which through my first time attendee eyes, didn’t say a whole lot about anti-bullying. The thought was good, but the follow through just wasn’t there.

Despite this, I did enjoy my time at Geek Out. I look forward to next years event and I am glad that I’ve found a group of people who share the same weird interests that I do. Geek Out offered a wide variety of panels, discussions, and learning opportunities for people of all ages and genres of geekdome, and I hope it continues to grow. If I could recommend one change however, I would hope that they would take a look at how they manage their guests and speakers and adhere to the industry standards for compensation of event registration fees in exchange for participation in the event. It is only fair.

After this article ran we were contacted by the Geek Out coordinator, who has since refunded the Bruce family the cost of their tickets. Thank you to Geek Out for your prompt attention to this matter – the community appreciates it!

This article was submitted by an awesome reader. We gladly publish user submissions. For more about the author of this particular article, we have inserted the author bio at the bottom of the content when it is provided. Submit your own article by following this link: http://ashevilleblog.com/submit-an-article/
Previous Recap in Pictures: All Go West 2014
Next Number 96 and the Taste of Karma