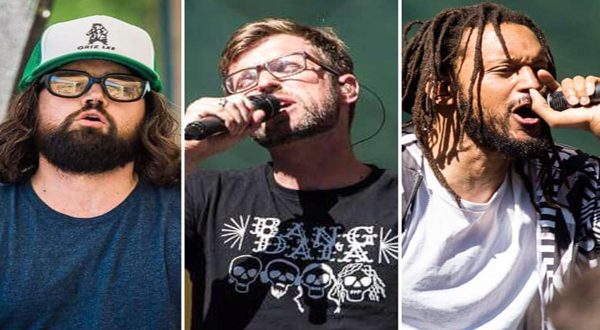 Recently, alternative hip-hop rock band Flobots announced the second leg of dates for their RISE + SHINE Tour, in support of their recently released fourth album, NOENEMIES. Adding 18 new dates that take the band throughout mid-west and along the East Coast in early 2018, Flobots’ second leg of the RISE + SHINE Tour kicks off on January 9th, 2018 in Omaha, NE and bring the band’s politically charged live show to major cities such as Chicago, New York and Philadelphia before wrapping up on January 28th in Kansas City, MO. The complete list of shows is included below, with tickets on sale at www.flobots.com

The RISE + SHINE Tour is Flobots’ call to action, set to remind us that the division and negativity that currently dominate the national conversation is not in the spirit of human nature – that our true potential is much more positive and welcoming. Flobots’ RISE + SHINE Tour offers the opportunity to elevate above the rhetoric and come together for a night of music and connection. Flobots state, “The music on our album NOENEMIES is about our power to see each other more fully. We find that there’s nothing better for the soul than meeting people face to face. We cannot wait to hit the road.”

In tandem with the tour announcement, Denver Comic Con exclusively premiered the video for Flobots’ new single “Quarantine.” Flobots’ Emcee Brer Rabbit created the video using footage from the 1988 classic Anime film Akira. Brer Rabbit, a fan of Akira creator Katsuhiro Otomo, discovered the movie as a teen from a bootleg VHS, which in his own words, changed his life forever. “The colors, the characters, the MUSIC, the message,” states Brer Rabbit, “Otomo painted a vision of the future in dark strokes, the constant clash for power, the eradication of information to control the narrative, how our monsters and heroes are homemade, and ultimately that children will be the ones who will have to pay the price.” Seeing the parallel themes in Flobots’ song “Quarantine,” Brer Rabbit was inspired to “dust off my old Otaku chops and make an Anime music video.” He continues, “In times of division, vision is essential. We do not need to separate ourselves from one another. We need to set a perimeter around the parts of ourselves that deny other people’s pain- to quarantine the part within that feeds on the ritual of ‘us versus them,’ of enemies. In the war against fear we are all on the same side.”

NOENEMIES (released May 2017) is, without question, Flobots’ most ambitious and sophisticated statement to date – both lyrically and musically. Funded entirely by a Kickstarter campaign that garnered $31,000 over its goal, the music on NOENEMIES is undeniably Flobots music, but it’s also assuredly music made by artists who have matured and expanded their horizons. The release was highly-anticipated by fans and critics alike — NOENEMIES shot up the Billboard Independent Album chart, where it debuted at #12.

Influenced by stories shared by the late Dr. Vincent Harding, a Southern Freedom Movement historian and professor and longtime band friend and mentor, and inspired by the band’s recent grassroots community work hosting workshops, classes and keynote speeches about using collective song to build social movements, NOENEMIES is a body of songs that speak to the urgency of the current moment.

Each of the tracks on NOENEMIES serves as a powerful, poignant new anthem, many packed with surprises both subtle and grand. Taken as a whole, the album is enormous in breadth, enveloping and electrically charged, befitting of the finely crafted, carefully chosen words. NOENEMIES virtually begs the listener to delve and to contemplate, to share and revel.

For the recording of NOENEMIES, Flobots’ core trio – emcee’s Brer Rabbit (Stephen Brackett) and Jonny 5 (Jamie Laurie) and drummer Kenny Ortiz – enlisted the help of trusted musical friends to bring their vision of the album into reality. Musician/Producer Gabriel Otto worked intimately with the band to craft a distinct sonic landscape, recruiting a string section, horn players, and a gospel quintet to layer recurring motifs over the band’s signature grooves. They teamed up with founding Flobot Mackenzie Gault (viola) and longtime musical collaborator Serafin Sanchez (saxophone, keys) to co-write a number of songs. The band incorporated voices, melodies, and words from throughout their collaborations – both on and off stage – into the songs on NOENEMIES.

From the beginning, Flobots’ sound defied categorization. Weaving conscious hip-hop lyrics and classical viola solos over live instrumentation, their anthems captured attention from all directions. When Flobots first catapulted onto the global scene in 2008 with their platinum single ‘Handlebars’ from their first album release Fight With Tools, it was the fastest charting song debut by a new artist in 10 years. Released during the frenzy of that year’s election, the band’s call to envision “another America” resonated with a generation experiencing a sense of profound political and social awakening. In a span of months, Flobots went from playing at local clubs to selling out tours internationally, performing on late-night television, signing a major label record deal, and receiving constant rotation on alternative radio.

Now, a decade later and with three critically acclaimed albums under their belt, Flobots are still dedicated to creating and performing anthems for a better world. And in 2017, amidst a nation taking to the streets, for Flobots that means delivering a unique brand of protest songs. Enter NOENEMIES – bringing the songs back to the people.

This article was brought to you by one of our awesome staff writers. Some of our writers don't want the fame and glory that comes along with being awesome, so we respect their privacy. Want to tell them how good their work is? Write a comment below and leave them some love!
Previous NBC Sports Group to Televise FEI World Equestrian Games™ in September 2018
Next Day and Weekend Passes for FEI World Equestrian Games™ Tryon 2018 on Sale December 20