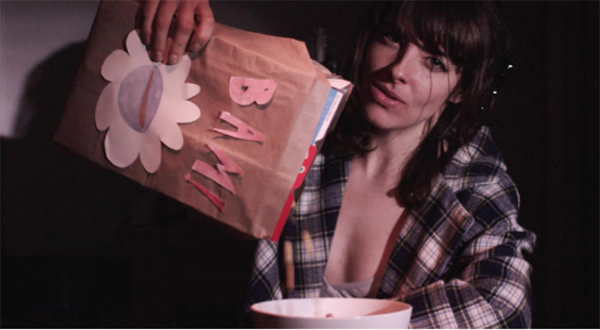 Last week, Hop Along‘s new album Bark Your Head Off, Dog was released via Saddle Creek and was met with incredible critical acclaim across the board and the pond. Lead single “How Simple” has found a home on stations including Sirius XM, Sirius The Loft, WFUV, KCRW, KEXP and The Current, as well as rave reviews including Pitchfork, NPR, Esquire, Vulture, VICE’s Noisey and Stereogum.

Today, Hop Along shares the “How Simple” video, marking the first official video for the album and the first time the band has starred in a music video. The song’s joyful, kinetic energy is met with its emotional depth as viewers are immersed into the the fantastical world they create.

Frontwoman Frances Quinlan worked closely with director Derrick Belcham in creating the video. “This is my first time appearing in a music video; in which case I decided to do something that felt risky to me,” says Quinlan. “I told myself that I’ve danced through my own house solo enough times to do an alright job of it in front of a camera. All that being said, I’m still surprised that this piece came to be. I wasn’t sure I had it in me to do it. Derrick did an excellent job directing, he made it a lot easier for me to access that part of myself and made it all look dreamy in a way that I couldn’t have achieved otherwise.” Belcham shares, “Frances came to me with a fully-fleshed out idea for this video, and approached the dancing with so much enthusiasm and vulnerability, it was such a pleasure to work this thing out with her.”

Self-produced and recorded at The Headroom in Philadelphia by Reinhart and Kyle Pulley, the formidable 9-song collection is the band’s strongest and most cohesive album to date. Crafted by Frances Quinlan (songwriter, lead vocalist, and rhythm guitarist), Tyler Long (bass), Joe Reinhart (guitar), and Mark Quinlan (drums), the album considers what it’s like to cast off longheld and misguided perceptions, yet without the assurance of knowing what new ones will replace them.

Hop Along will bring their dynamic, powerhouse live shows to stages across the nation this spring. Full list of tour dates below:

6/8: Toronto, ON @The Legendary Horseshoe Tavern #

This article was brought to you by one of our awesome staff writers. Some of our writers don't want the fame and glory that comes along with being awesome, so we respect their privacy. Want to tell them how good their work is? Write a comment below and leave them some love!
Previous Brews and Bears May 11 @ WNC Nature Center
Next Fundraising Goes Public for Red Panda Exhibit at Nature Center