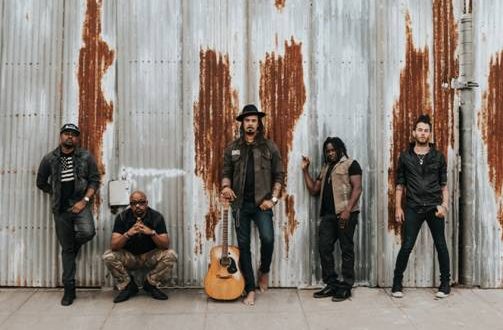 MICHAEL FRANTI & SPEARHEAD–led by the socially and environmentally conscious singer, songwriter and guitarist–are bringing their “Love Out Loud” world tour to North America this summer including a stop in ASHEVILLE at SALVAGE STATION on THURSDAY, AUGUST 3.

Over the Memorial Day Weekend, the group released a joyous, positive and uplifting video for “Summertime Is In Our Hands,” which Franti talked about during an interview on the nationally syndicated “Delilah” radio show, which has an estimated eight million listeners (listen to the full podcast episode via iTunes here). Filmed in Bali and directed by Franti, the video brings to life a vibrant story about enjoying every moment with a heartening plot twist towards the end. Click here to watch.

The song–off his most recent and ninth studio album, SOULROCKER (Fantasy Records)–carries very meaningful inspiration for Franti as it was written when his son was diagnosed with a rare kidney disease. As a result of the diagnosis, they grew closer, valuing their time. The feeling is “summer is whenever, the memories last,” says Franti. “Live your life to the fullest, even in the darkest hour.” A mini-documentary about the “Summertime Is In Our Hands” video and the “Do It For The Love” organization–the wish-granting non-profit co-founded by Franti and his wife Sara that brings people living with life-threatening illnesses, children with severe challenges, and wounded veterans to live concerts–has also been released. Watch the moving mini-documentary here.

The new “Summertime Is In Our Hands” video follows the band’s recent music video for the song “Crazy For You” (also from SOULROCKER) for which Franti did over 200 takes to complete–avoiding computer-generated graphics or the utilization of green-screens. The video features a new remix of “Crazy For You” which Franti is calling the “San Francisco Funk Remix.” The video originally premiered with Relix on March 27; click here to watch the visually striking and expertly edited video which was shot mostly in Istanbul, but also in London. “A few weeks after we filmed in the Besiktas Soccer Stadium (in Istanbul),” says Franti, “38 people were killed and 166 wounded in a terror attack just outside after a match. We dedicate this video to them, to Besiktas Football Supporters and to all those around the world calling for an end to political violence everywhere.” To read more about Franti’s feelings on the video, click here.

Onstage is where MICHAEL FRANTI & SPEARHEAD truly take flight; they embrace the power of music knowing how it can inspire, uplift, and make people want to dance or cry. For the aptly titled “Love Out Loud” world tour, which kicked off March 2 in Alaska including international performances already completed in South Africa and Japan, the group will be stopping throughout North America from now through October. Following this past weekend’s performance at the BottleRock Festival in Napa, CA, the “Love Out Loud” tour will also include festival stops at the Rock ‘N’ Roll Marathon in San Diego, CA, Mountain Jam Festival in Hunter, NY, California World Fest in Grass Valley, CA and many more.

This article was submitted by an awesome reader. We gladly publish user submissions. For more about the author of this particular article, we have inserted the author bio at the bottom of the content when it is provided. Submit your own article by following this link: http://ashevilleblog.com/submit-an-article/
Previous Catawba Brewing Announces New Festbier Specialty Release
Next Gladiator Polo at TIEC Starting September 1st

A look at Hyaluronic Acid – A sold skincare substance

Which Under Sink Hot Water Heaters Are The Best?

How to Create Customized Season’s Greetings on Mixbook