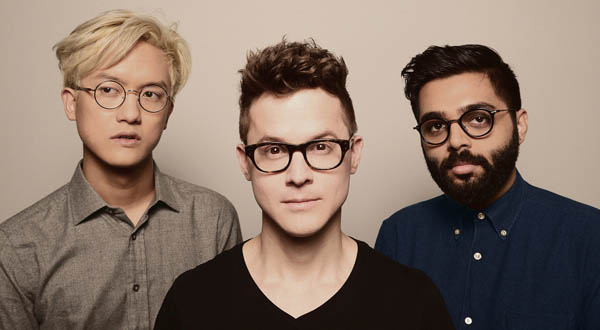 Son Lux has never been easy to pin down. The project, founded by New York’s Ryan Lott, began as a solo exploration of the jagged, icy line between the strange and the familiar, in which sonic structures supplant the conventions of pop form. Over the last eight years, though, the name has taken on myriad meanings, just as the work has subsumed sounds and collaborators. Son Lux has been: both remixer and remixed (from Nico Muhly to Zeds Dead); beatsmith for rap’s left field (à la Busdriver); film scorer (The Disappearance of Eleanor Rigby); one-third of the Sisyphus supergroup (with Sufjan Stevens and Serengeti); and orchestrator of collaborations (heard on Lott’s albums) with artists as far ranging as Lorde and Chris Thile.

But now, Son Lux is a band. A trio, to be exact; one that has meticulously woven together dizzying percussion, fraying guitar, symphonic bluster, and haunting vocals into a quaking and vivid post-pop (post-everything) burst called Bones. The fourth Son Lux LP combines all of the architectural precision and aural inventiveness we’ve come to expect, with more immediacy and melody than ever. That’s all to do with the crew.

Lott’s own history is a mix of childhood piano lessons, high school bands, classical schooling, and professional composing. He’s now joined by the intrepid guitarist and composer Rafiq Bhatia (whose debut recordings feature contributions from Björk producer Valgeir Sigurðsson and MacArthur Fellow Vijay Iyer, among others) and percussionist Ian Chang, who lends his roiling hybrid of acoustic and electronic drumming to Matthew Dear, Body Language, Landlady, and many more. Each is a writer, producer, and performer with an omnivorous taste in music. And if you have caught the group on tour, then you already know: together, they’re a lean and mean force of improvisatory wilding and beastly execution.

“This moment changes everything,” Lott howls on the album’s first full song. After the immersive prologue (“Breathe In”) rumbles through, we’re jabbed with the neon organ tolls that announce “Change Is Everything.” Shards of sampled choir and other cut-up lushness lead the charge from welcoming warmth to screaming triumph—metamorphosis is a recurring theme on Bones, and aggressively so. On “Flight,” for instance, pointillistic stabs of flute and percussion join churning synths and guitars to destabilize the song’s escapist surface: “What a noise we’ll make… / We shout until our bones break!”

Whether happy accident or actual consequence, the focus on change makes sense. When Lott was preparing to take 2013’s Lanterns on the road, he knew he’d need a couple of musical chameleons to bring the studio work to life. He had no idea they’d also awaken something in him. Bhatia and Chang started out as hired guns, but by the end of their second show, the three had become a unit. One tour became seven, and as they spent every waking and sleeping hour together, the music started to come.

Son Lux’s “I” became “we,” and not just in real life. The more passive, inward voice of Lott’s older records here evolves into a thing of collective urgency. The transition can be heard plainly on “I Am the Others,” where ghostly guests DM Stith and Hanna Benn lead our host to the song’s titular revelation over moody minimalism. Personal privilege is pitted against shared responsibility on “White Lies” too. While the track employs screeching guitars, trap snare, and eerily dispassionate vocals (supplied by Daughter’s Elena Tonra) to punctuate the point, Lott illustrates the angst of facing societal ills from a place of cloistered comfort. “Undone” asks outright: “Who are you? What, then, will you do?”

Action is central to Son Lux. Though the project’s band status gives it a sturdy frame, the players pride themselves on staying mercurial. The nucleus of each song is often a fragment of sound discovered during improvisation. To wit, the odd beat anchoring “This Time” is just a couple of slowed-down seconds culled from a 12-minute run of Chang slapping a cajón. And the charged guitar bends underlying the chorus? That’s Bhatia playing out of context—the two were stitched together later, topped by the unshakable voices of a nine-woman choir led by Holychild’s Liz Nistico. Guests are vital to ideation. For “You Don’t Know Me,” singer Moses Sumney mimics a Japanese flute, while yMusic’s Rob Moose’s Motown-invoking strings punctuate the verses.

For all the calculated execution involved, the result is as visceral as the album’s title. Bones is full of color, energy, and life. That vibrancy extends to the cover, where the design geniuses at The Made Shop use fluorescent tubes, balloons filled with holi powder, blow darts, and a high-speed camera to capture something equally ephemeral and explosive. Son Lux already had the first part down. Now their sound has the volatile charge to match.

Son Lux at The Mothlight

Who: Son Lux and The FADER

This article was brought to you by one of our awesome staff writers. Some of our writers don't want the fame and glory that comes along with being awesome, so we respect their privacy. Want to tell them how good their work is? Write a comment below and leave them some love!
Previous Asheville Humane Society Receives Over $23,500
Next Live Taping: Sick of Stupid Comedy Tour: A Comedic Look At All Things Southern 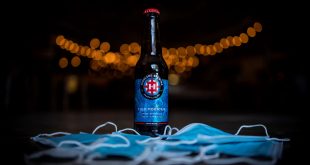