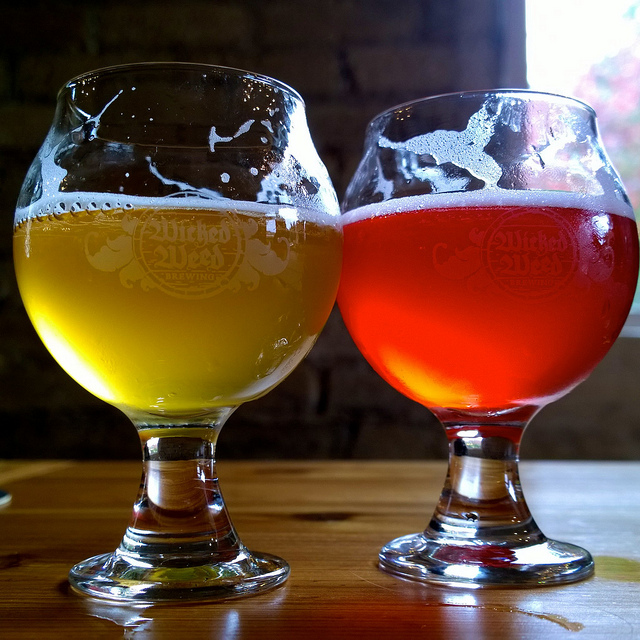 Wicked Weed Brewing opened its doors in late 2012 with two sour beers on draught, something ground-breaking in the city of Asheville. One of those beers was Black Angel, a black sour aged six months in bourbon-barrels with tart cherries.

Fifteen batches and two years later, Black Angel Cherry Sour, still one of the brewery’s most anticipated releases, has inspired a series of “Angel” Sours. Red Angel, Gold Angel, White Angel, and The Angel of Darkness are set to release throughout 2015 as a unique and limited series of sours.

“These beers utilize the most labor intensive process we employ to make our sour beers so we can only produce them once a year. Using a ton and a half of fruit and allowing the beer to age for eleven months requires extensive time, energy, and resources,” explained Walt Dickinson, Head of Brewing Operations. “All of that work develops truly dynamic and beautiful beers.”

The following two beers in the series, Gold Angel (an apricot sour) and White Angel (a wild grape sour) will release this summer, and in addition to Red Angel, draw their inspiration, in part, from traditional Lambic fruit styles and processes.

“When we first started brewing, Black Angel, Luke (Head Brewer of Wicked Weed) and I approached its creation with unbridled creativity. Over time, we found ourselves coming back to really respecting traditionalism,” stated Walt. “Consequently, we’ve retreated more to the roots of sour beer and this is reflected in the series with the Red, Gold, and White Angels all paying homage to that traditionalism.”

The culmination of the series, The Angel of Darkness, is slated to reach 13-14% abv and was aged in Portuguese sherry casks on boysenberries, blackberries, raspberries, and cherries. Representative of Wicked Weed’s marrying of traditional fruiting methods with their own means of crafting American sours, The Angel of Darkness, forecasts a new direction for the future of their sour program.

“If one were to enjoy the entire Angel series together, it would tell a story of who Wicked Weed is, and where were we are going with our sour program,” stated Walt. “The Angel of Darkness is where we found our new voice; a voice tempered by conventional wisdom and simultaneously emboldened by renewed vision.”

Sour enthusiasts can expect to see limited pre-sales and bottle releases from spring to winter of Red Angel with Raspberries (March), Gold Angel with Apricots (May), and White Angel with wild grapes (July) with a special release of Angel of Darkness with boysenberries, blackberries, raspberries, and cherries (December). Online bottle pre-sales (a month prior to the bottle release) and the on site bottle release date for Red Angel will be announced via the brewery’s social media outlets mid February. All bottle releases will be conducted at the The Funkatorium, 147 Coxe Ave, Asheville, North Carolina, with no plans for NC distribution.