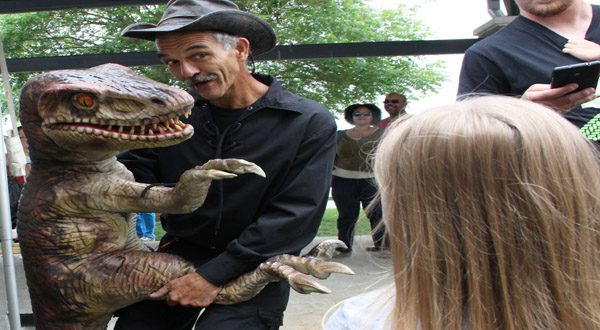 Another new act, Dakota and Friends, is an interactive and educational experience featuring six types of dinosaurs. The main attraction is Dakota, a lifelike roaming Deinonychus. Fairgoers can see the dinosaur move and have a photograph taken with the creature. Children of all ages also will be able to touch dinosaurs and learn more about the work of paleontologists.

Other new attractions are The Great Atlanta Puppet Show, a specialty puppet show filled with music, action and unique puppets; The One Man Band and Son, a father-and-son duo that covers songs from the 1960s to now; Jay Mattioli Family Magic, a comedic magic show; and bluegrass instrumentalists Little Roy and Lizzie.

The N.C. Mountain State Fair will feature more than 40 rides and games on the midway. James H. Drew Exposition is bringing three new rides to the fair this year: Cherokee, a swing ride for small children; Dalmatians, a spinning ride for older children; and Surfer, an exhilarating ride for teenagers and adults.

Advance tickets for the fair are available now at participating Ingles stores, the WNC Ag Center and the WNC Farmers Market. More details are available at www.mountainfair.org.

This article was submitted by an awesome reader. We gladly publish user submissions. For more about the author of this particular article, we have inserted the author bio at the bottom of the content when it is provided. Submit your own article by following this link: http://ashevilleblog.com/submit-an-article/
Previous Hail Cassius Neptune 9/8 at Pisgah Brewing
Next A Future Without Chocolate? Terrifying!