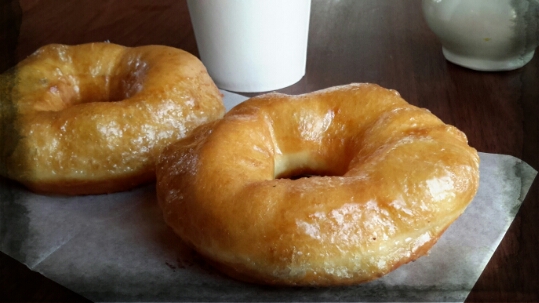 I am a transplant to Asheville; yes, I own it. I love Asheville’s food scene, but one thing it has never done well until now is boutique style doughnuts. Tired of the same old same old chains like Dunkin Donuts and Krispy Kreme, I have avoided trying to get a good doughnut in Asheville for a long time. This morning I decided to give a third perspective on the two newcomers to Asheville doughnuts: Hole and Vortex Doughnuts (read my review on Vortex here). As new establishments, they both get a little wiggle room in my opinion for working new bugs out of their preparation and customer service experience.

Being more of a night owl, I don’t usually volunteer to review breakfast restaurants. My two fellow food critics in Asheville have provided their own opinions on these two fledgling businesses. However, it seems one might need to be twelve years old with a well-thumbed copy of the urban dictionary and a tolerance for vulgarity to make any sense of their opinions. Their experience in the food industry is dubious at best, so I felt it was important to give a third perspective in our country’s primary language of English. I also happen to be a bit of a doughnut enthusiast and connoisseur, so I felt my perspective might be extra valuable in this instance, and worth dragging myself out in the frost of the Halloween morning.

In the area around my hometown, boutique shops like this are everywhere. In a ten minute drive, one could locate a dozen similar establishments with the garden variety glazed doughnut. Most were ordinary and did not stand out, but one in a small town produced doughnuts of such quality and superior texture that residents of that town who have moved away have not found equal anywhere in the country. Now that this doughnut shop has closed and passed along its recipe to the new owners who have not managed to reproduce the famous doughnut it used to create, I have sought for many years to find a shop who could duplicate the flavor and texture of the doughnuts I ate growing up. But in twenty years of looking, I have not found a single place that has ever come close. Until today. The doughnuts at Hole are the closest I’ve ever sampled, and differ only in the shape of the doughnut but not in the flavor, texture or glaze.

I’m a bit of a bear in the morning, and so I was not in a very good mood when I arrived around 8:30 this morning. I walked in, cold and grumpy, and in dire need of a good cup of coffee and a warm and fluffy bit of fried dough. I was taken by surprise by the overwhelming smell of burnt coffee. There were three doughnuts on display: bourbon rosemary, toasted almond, cinnamon & sesame, and vanilla glazed. I was in no mood for fancy variations, and frankly the Bourbon Rosemary sounded quite unpleasant to me, so I opted for the ever-popular vanilla glazed and a cup of the burnt-smelling coffee.

The atmosphere was warm and yet industrial, utilizing reclaimed beadboard on the walls, lots of stainless steel finishes, and the informative and entertaining view of the preparation area where one could see the doughnuts in various stages of preparation. In my experience, doughnut shops typically employ only one or two people and carry a full variety of pastries not limited to doughnuts, but including a Southern favorite I haven’t managed to find here: kolaches. This restaurant employed four people and provided a selection of only three doughnuts at quite a high price of $2 a doughnut. I’m accustomed to a more affordable 50 to 75 cents per doughnut, even at boutique shops like this one. However, I’m not one to argue with paying a living wage and employing local people for a superior product. So once it became apparent that this was the case, I accepted the price tag and hoped for the best.

After ordering my vanilla glazed doughnut, I pumped my coffee from the dispenser at the register. I like a strong cup of joe, but this appeared to need quite a bit of cream and sugar to make it palatable. I sat down with dread in my heart, expecting the doughnut to mirror the coffee, which was as burned tasting as it smelled.

But I was delightfully surprised. The doughnut was sublime. Warm and fresh, yeasty, airy, it sat on my tongue like a snowflake and melted between my teeth like cotton candy. The crust was the slightest bit crunchy, and the glaze was light and did not overpower the delicious dough beneath. It is one of my biggest pet peeves about the chain doughnut shops: cloying, thick, syrupy glazes that completely obscure the flavor of the doughnut. This always makes me wonder what they’re trying to hide. But this glaze enhanced the flavor of the doughnuts, and completely distracted me from the substandard coffee. I close my eyes with delight as I savored the smell, texture, and warm tender flesh of the doughnut.

While at first I was offended at the high dollar price tag, I now feel they are worth it and then some. It is quite possible I will drag my grumpy bear self out in the morning dew to sample Hole’s doughnuts again and again.

Nony Mouse was born to an oppressive and wealthy family. She struggled to break free of her 'golden cage' for many years until she met her prince on a flight in Asia and married him. Nony and Ali began to explore the world and she discovered her passion for food. While in France, she met a chef who taught her the finer points of poisson preparation and then in a delicious vegetable stew we know as ratatouille. She did some time in kitchens in France before heading to the United States in her early twenties. Unfortunately a terrible accident took her Ali from her and she was unable to ever work in another kitchen again. However, she brings her exceptional culinary expertise to Asheville and expects - demands - that the food establishments here strive for the perfection Nony expects of herself. She hopes to share her persnickety perspective with an audience that is hungry for a food critic who can express herself well and appeal to the more sophisticated palate.
Previous Local Flavor AVL partners with ENO and Highland Brewing to Celebrate 100 Asheville members
Next The Asheville Doughnut Experience: Vortex Doughnuts