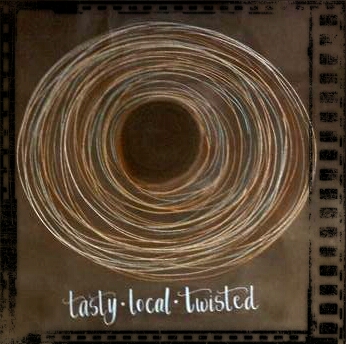 As I mentioned previously in my review of Hole, found here on AshevilleBlog.com, I am a big fan of boutique doughnut shops and grew up in an area with a wide selection of them. This has not been an area where Asheville has excelled, but a burgeoning local industry and doughnuts and a dearth of well-written reviews has prompted me to drag myself out into the frosty Halloween morning to sample the wares of two brand new establishments in Asheville.

After an excellent doughnut at Hole, Vortex may have had been disadvantaged had they been able to provide a yeast doughnut for an apples-to-apples comparison. And as I mentioned before, since this is their first week in operation, I allow for some difficulties in working out new production and service procedures. However, they were unable, due to a mishap at 4:30 this morning, to produce an equivalent yeast doughnut and offered only cake doughnuts. I usually find cake doughnuts to be oily and unpleasantly dense and have yet to to try a cake doughnut which has pleased me on any level, so I admit an initial bias and disappointment that I will attempt to correct on a future visit when yeast doughnuts are available.

On arrival, I found the parking across the street to be slightly confusing and haphazard, but a quick walk across the low traffic avenue landed me in a modern, bright building with high ceilings and a clean, appealing look. The novel use of chalkboard paint for the entire wall behind the counter gave plenty of room to display a menu with a wide variety of both doughnuts and coffee products. But after my experience at Hole with rather expensive doughnuts, I was slightly irritated that prices were available for everything but the actual doughnuts themselves. I’m not sure why they saw fit to withhold those prices and I still really have no idea how much I paid for the doughnuts but my tab for two mochas and two doughnuts was $17. I found this to be rather exorbitant and almost three times the cost at Hole, and hoped the doughnuts were as worth it as they were earlier. Moreover it seemed they were asking for a tip, which I frowned on considering the already inflated price tag.

Despite the well-rounded menu, the available doughnuts were limited to only three selections — all chocolate cake — and additional varieties were going to be at least another half an hour, none of them yeast. Reluctantly, I selected one each of a chocolate orange peel doughnut and a chocolate caramel peanut butter doughnut. I accompanied my order with a mocha made from coffee roasted by their sister company and our local favorite French Broad chocolate lounge coffee chocolate. The staff were dressed in costumes for Halloween and offered profuse apologies for the lack of selection, which would have made me feel better had they at least offered more than simply a chocolate cake doughnut (say perhaps a vanilla or a pumpkin variety to round out the flavors). Since they were still in their first week, I will just hope they learn from their experience and change things up.

After I got my doughnuts, I sat down to wait for my mocha and sampled the orange peel doughnut. It was surprisingly crispy on the outside, not as dense as some of the other cake doughnuts I’ve sampled, but sadly, as cake is wont to do when it is fried, the bottom half was saturated with oil that stained the napkin it sat on, and gushed into my mouth when I bit into it, leaving me feeling queasy. I really enjoy the contrast of the acid and sweet creamy texture of chocolate, but I was disappointed to find no trace at all of orange flavor either in the doughnut itself or, surprisingly, in the candied orange peel on top either. The caramel peanut butter doughnut was similar in its oily nature, but the peanut butter flavor overwhelmed the caramel and chocolate both and left me wanting a better balanced, more complex flavor.

The mocha, in stark contrast to the doughnut, was outstanding. French Broad Chocolate did not disappoint the palate and the well-roasted coffee provided a nice round flavor which did not require, as many mochas do, adjustment at the table with additional sugar. The presentation was as delightful to the eyes as it was to the tongue, and I was pleased to see more shaved French Broad chocolate atop the fresh whipped cream and a warm puddle of chocolate at the bottom of the cup when I finished. I wanted more chocolate mocha, but considering I’d already spent $17 on unpleasant cake doughnuts and two mochas, one for me and my friend, I wasn’t about to spend more this morning.

Unlike most doughnut shops, they are open conveniently late, until 4 p.m. But if you are looking for a place to hang out and surf the web, count Vortex out until they correct what has to be an obvious oversight and provide WiFi like most modern establishments.

I will attempt to refine my doughnut rating in a future visit where I can sample the yeast doughnut.

Vortex Doughnuts is located at

Nony Mouse was born to an oppressive and wealthy family. She struggled to break free of her 'golden cage' for many years until she met her prince on a flight in Asia and married him. Nony and Ali began to explore the world and she discovered her passion for food. While in France, she met a chef who taught her the finer points of poisson preparation and then in a delicious vegetable stew we know as ratatouille. She did some time in kitchens in France before heading to the United States in her early twenties. Unfortunately a terrible accident took her Ali from her and she was unable to ever work in another kitchen again. However, she brings her exceptional culinary expertise to Asheville and expects - demands - that the food establishments here strive for the perfection Nony expects of herself. She hopes to share her persnickety perspective with an audience that is hungry for a food critic who can express herself well and appeal to the more sophisticated palate.
Previous The Asheville Doughnut Experience: Hole on Haywood Road
Next Frugal Backpacker Opens in Westgate