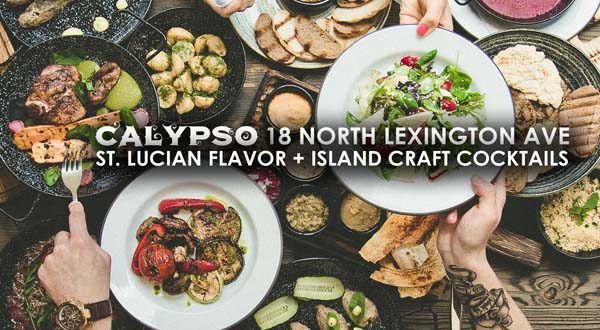 On Tuesday the 20th of December, Calypso, Asheville’s newest restaurant will open its doors, succeeding a long and storied history of some of Asheville’s most popular hot spots at 18 North Lexington Avenue.

The word on the street is an excited discussion about the addition of a culturally authentic restaurant that features actual recipes and flavors from afar. In this case, owner Esther Joseph brings her childhood memories of St. Lucian flavors to Asheville with an expectation of titillating the palates of Western North Carolina diners with amazing ethnic St. Lucian foods and island cocktails.

“My dream has been to open a St. Lucian restaurant that provides guests with the same “soul food” experiences that warmed by heart as a child. I have been blessed to have found some very experienced chefs who understand St. Lucian food, especially seafood and West Indian curries. Thankfully, they were able to translate my recipes into amazing dishes.”

Calypso welcomes as Chef de Cuisine, SeanTomas Shaw, a French culinary school graduate and former Executive Sous-Chef Trainer for Emeril Lagasse. Chef Shaw has worked in some of the finest kitchens from Hong Kong to Italy. “I helped Emeril open seven of his restaurants, so I am very familiar with the importance of new beginnings. Thankfully, I have vacationed in St. Lucia and I spent my time there eating in dives and the best resorts. My idea of fun is talking to cooks and chefs, so most of my time in St. Lucia was spent being blown away by the food and meeting the sweetest and nicest masters of St. Lucian cuisine. I compared my notes with Esther’s home recipes. Putting these dishes together has not just been fun, but also furthered my understanding of the spirit of St. Lucian food.”, says Chef Shaw. “I love her vision of making this restaurant a home for healthy soul food.”

Esther has also added Sous Chef TJ Centanni to her team. He is a graduate of the Culinary Institute of America, and former Garde manger at the Highlawn Pavilion, NJ. Before Chef Centanni worked as the Sous Chef at Lex 18, he apprenticed with seven-time James Beard award winning Chef Eric Ripert.

Esther’s vision for Calypso is to make it Asheville’s port of call for homemade St. Lucian soul food. “Our dishes represent a melange of English, French, and African-inspired Caribbean cuisine. I would love folks to be transported to the beach in our amazing new bar. Our Caribbean-inspired cocktails are offered with or without spirits.”

Calypso is open for lunch and dinner. After lunch, the bar opens at 4pm, and on Friday and Saturday nights, we will be hosting Island-Vibe Disco Dance Parties featuring amazing DJ’s.

Esther wishes to invite all to experience Calypso’s warm, friendly, and homey environment as well as the exceptional and healthy fare.

The national dish of Saint Lucia is green banana and salt fish. However, in general, the cuisine in St. Lucia is a blend of West African, European (due to its British and French roots) and East Indian cuisine.

Another famous dish on the island is Callaloo, a dish with or without meat, green leafy vegetables, green figs (banana), yam and dumplings. The British colonial and East Indian influence is noted in the variety of spices used in its cuisine such as curries, bonnet peppers, garlic, cinnamon, nutmeg, cocoa, cloves, parsley and others.

ST. LUCIAN ROTI
Calypso will also feature the famous St. Lucian Roti, one of the most popular dishes on the island. Roti is an Indian flatbread, wrapped around a choice of curried goat, chicken, beef, and vegetables.

Born on the Caribbean island of St. Lucia, she is a health conscious, life-long foodie, nature lover, and consummate business woman.

Esther’s recipes are inspired by her memories of St. Lucia and the family dishes that helped keep her hopeful, despite a hard and impoverished childhood. Her earliest professional aspiration was to become a chef and open up her own St. Lucian soul food restaurant. She graduated from Monroe College, St. Lucia with a degree in Hospitality Management to further her dream.

Moving to Brooklyn in her teens, she went on to get a certificate in Restaurant Management from New York Food and Hotel Management School.

One summer, Esther started a landscaping project in Manhattan with a friend, which grew into a thriving 54 employee company. During that time, she graduated from NYU with a BA in International Affairs, traveled extensively across three continents, and published three books. Esther went on to another degree as a Doctor of Naturopathy (ND) from Trinity School of Natural Health. Her lifelong interest in health and nutrition is supported by her passion for the essence of true soul food:

“It’s important to balance the enjoyment of tasty foods and eating healthy. Soul Food shouldn’t kill you. That’s why salads are so important in St. Lucian Cuisine. Our St. Lucian term, “Food on a Plate”, is actually a reference to the sides that come with the island’s main dishes. In St. Lucia, typically cucumber, tomato, and avocado salads are always served on the side, as well as fiber and nutrient rich yams and sweet potatoes.”

In Autumn 2016, Esther purchased the restaurant Lex 18 and began transforming it into Western North Carolina’s only St. Lucian owned Caribbean restaurant – Calypso. Her passion for healthy soul food and island craft cocktails will take the community by storm.

Esther moved to Asheville in 2011. She attends Jubilee Community and enjoys playing tennis at the Asheville Racquet Club.

This article was brought to you by one of our awesome staff writers. Some of our writers don't want the fame and glory that comes along with being awesome, so we respect their privacy. Want to tell them how good their work is? Write a comment below and leave them some love!
Previous Hooligan Scotch Ale Celebrates 5th Anniversary
Next Asheville Humane Society Waives Adoption Fees for Holiday Promotion